The 2009 Rochester NY Hamfest was in a new location this year, It is on the west side of Rochester instead of being South of Rochester. The admission price was reduced to only $5 and there was no extra charge if you wanted to sell things. As a result attendance was way up and there was lots of vendors. This is one of the vendors places inside of the building. 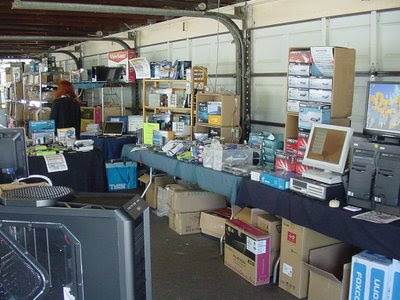 This new location also featured a large outdoor cooking area. There was lots of food, mostly hamburgs and hot dogs for $2.50 each. There was almost never a line to get to the food. 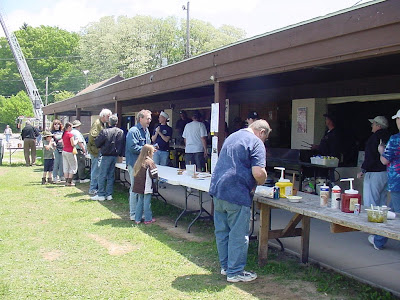 This is my van, the picture was taken late in the day so the nearby van had left leaving me alone. Also most of my stuff had already sold. I would leave the van with a collection jar and wander around to look for things to buy. 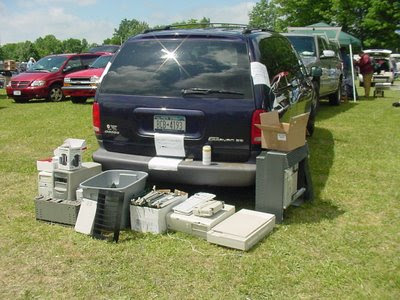 This is an overview of the large yard sale selling area. It was not nearly as crowded as it was in the former location. 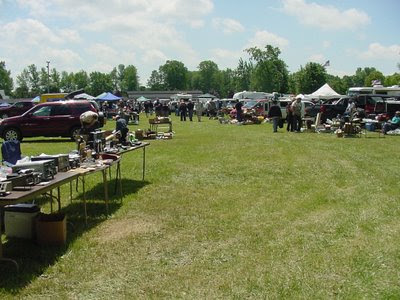 This is another one of the vendors. They used a truck to bring their stuff and are selling all kinds of computers and LCD screens. 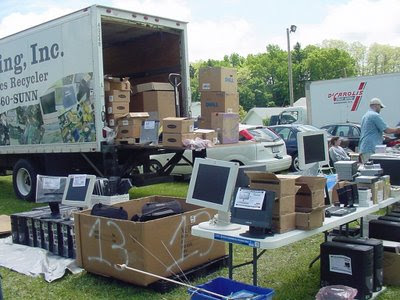 This is some of the stuff I found. The signal generator was only $10, and it works. The output jacks are broken so I replaced them with ones that only cost me 50 cents. Under it is a rack mount PC case that was free. It is the older AT style cabinet but I have converted them to ATX many times before. 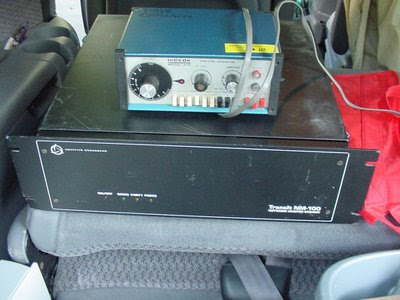 This is some more of the stuff I bought. The Dialogic card is a 12 port analog card that fits a PCI slot. The part number is D120JCT-LS and it sells for $200 used to $1000 new, I bought it for $1. I might use it to test my auto attendant/voice mail software on a newer card. In the box is a 8 port relay board for $1, a digital volt meter for $2. a de-soldering tool and a fuse block that I bought. The fuse block was to use the connectors to connect to an 833 tube to make a new bigger Vacuum Tube Tesla Coil. 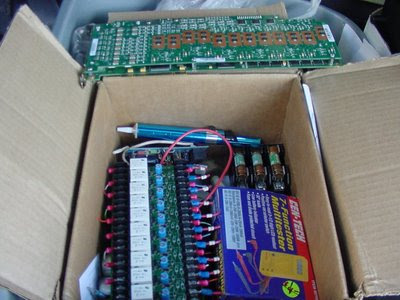 My opinion on gay marriage.

I thought I would give my opinion on gay marriage once again. I hear that we are no longer allowed to have our own opinion on the matter.

First a brief history. About 5 years ago Florida started promoting gay rights. Pat Robertson warned that there would be Hurricanes, tornadoes, and fires as a result. Then for 2 years in a row 3 hurricanes per year criss-crossed Florida. That was followed by fires so bad that the highways had to be shut down.

Next New Orleans was espousing its 'Southern decadence days' with phrases like 'Be as decedent as you want'. Then Katrina hid and destroyed New Orleans. Need I say more.

Next California was going to make millions by legalizing gay marriage. Then over 800 DRY lightning strikes in ONE night lit most of the state of California on fire. The devastation cost them BILLIONS!

Now the North East wants to enjoy the devastation with the rest of the country. Two states have started promoting gay marriage and New York wants to join them. I could say I told you so time and time again but the facts and the truth is as obvious as they can be. This promotion of gay rights will bring devastation on the North East. Is that what you want?

A while back I quoted the Scripture that says that 'if you do these things the land will vomit you out'.

Leviticus 18:24-28 'Do not defile yourselves in any of these ways, because this is how the nations that I am going to drive out before you became defiled. Even the land was defiled; so I punished it for its sin, and the land vomited out its inhabitants. But you must keep my decrees and my laws. The native-born and the aliens living among you must not do any of these detestable things, for all these things were done by the people who lived in the land before you, and the land became defiled. And if you defile the land, it will vomit you out as it vomited out the nations that were before you.
Posted by Bob Davis at 2:12 PM 1 comment:

UPDATE - It was the cable to the screen that was bad. It cost $10 on EBay.

I need your help! I have this Dell 1501 laptop that has no light for the screen. Here is a picture with the bulb working fine with an external high voltage power supply. So then I bought a new inverter on EBay, straight from China, installed it and it still does not light up the screen. That narrows the problem down to something in the BIOS (I reset it to factory defaults) or perhaps the wiring harness? Maybe it is a fuse on the motherboard? Does anyone know the solution? I googled it and read about 100 posts of people complaining about the same problem but no one knows the solution, do you? 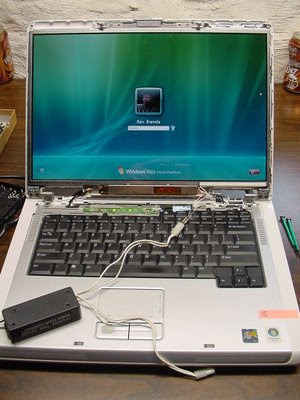 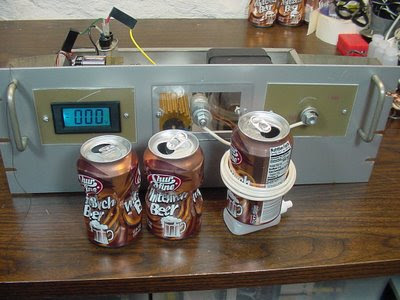 The video is now up on YouTube at: http://www.youtube.com/watch?v=SbjXFbuCvqE

Here is the guts that are inside of the 5 KV Can crusher. The 1 uF 2 KV capacitor that was removed from a microwave oven is mounted on a piece of plastic to insulate it from the chassis. 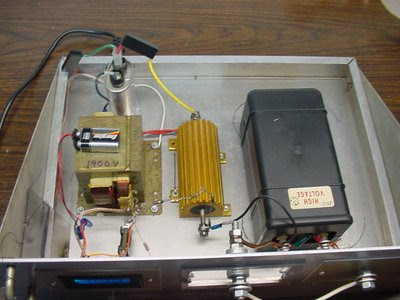 Here is the schematic of the 5 KV can crusher's power supply. The 10 Meg resistor in the voltage divider fried because it could not handle 5 KV. So I replaced it with 10 x 1 Meg ohm resistors. Technically I think it should have been 9 x 1 Meg ohm. The defibrillator capacitor was only 30 uF, I wanted to get a 100 uF capacitor that was on sale on EBay for $150 but the price was a little high. 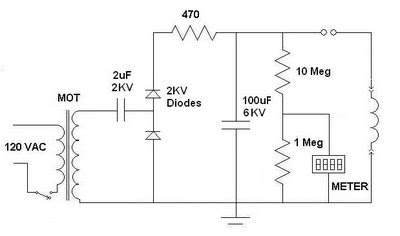 By the way, I do not know when I will have the time for it but I have a 833 tube that I won on EBay to build a really big Vacuum Tube Tesla Coil (VTTC) sometime. I cannot believe how big the 833 tube is!

Last weekend we changed out the old Nortel SL1 telephone system for a newer Option 11 telephone system. This is the old system's cabinet. I am turning it into a high tech book shelf. I just need to get the covers for the back. 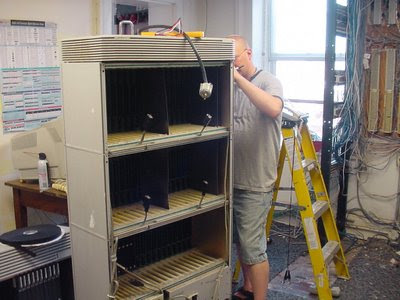 To be able to move the old system around we removed all of the old cards and piled them in the corner. I will be selling some of them on EBay soon. Let me know if you want to buy some of them. I plugged one of the old cards into 110 volts for a YouTube video years ago. It was very explosive ;-) Here is the link; http://www.youtube.com/watch?v=pZDMrHY23JM 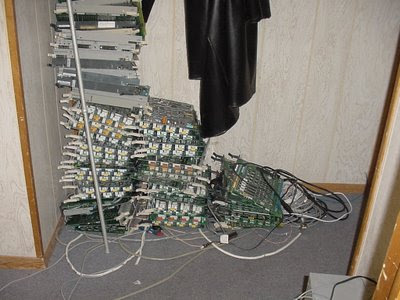 When I arrived they had already removed all the old wires. They were lined up in the hallway. The new system had punch down blocks with jacks on them and then cables to match to the telephone system. That reduced the amount of wires to be punched down by 1/2. 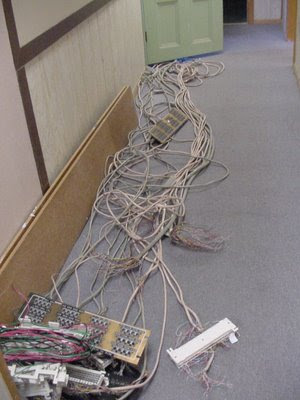 There is Barry and Jeremiah with the newer option 11 cabinets and the telephone patch panels on the left. Barry had a spool of interconnect wire in the ceiling that he is reaching for. They could have done it without me, so I took pictures while they worked. 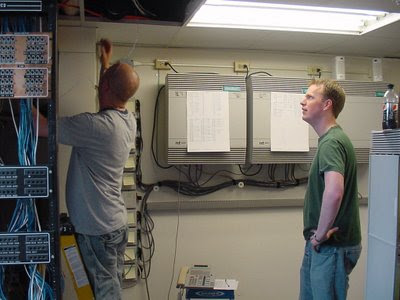