Back before the last presidential election I had a dream about the second civil war.  It was so strong and shocking that I goggled it to find out that someone was saying that if Obama did not win the election there would be a 'second civil war'.  Since then I have had many more similar dreams.  What bothers me most is that when I watch what is happening in Libya and Egypt, I see that same thing happening here in the USA!

Recently I came across an article full of sarcasm, I think, on the subject of the impending second civil war.  It was called 'Tax the Super Rich now or face a revolution'.  That connected several dots.  I have talked on how the government is taxing the poor and giving the money to the rich (bailouts).  In fact the government is taxing our kids and our grandchildren to feed the rich.  They want to tax the skinny and give that to the fat (Supposed 'fat' tax that only taxes skinny people who refuse to eat 'diet' food).  What will they tax next?  My favorite old question is what will they do when the taxes reach 100%?


Another problem is the squeezing of the middle class and the new graduates.  Taxes have gone up, employees are passing the cost of health insurance on to their employees.  Real take home incme has gone down dramatically!  My 'take home' pay is the lowest it has been in 20 years!  At the same time the cost of everything is going up.  Gas for the car has tripled.  New car prices have tripled.  Food prices are up, rent has doubled and a new home is out of this world.  The net result is that no one can afford any 'luxuries' like cable TV, internet, a newer car, etc.  So sales have fallen and the end result is a 'recession' that seems to last forever.

You ask me what I think about the TEA party?  Well they say 'Taxed Enough Already'.  I say we are grossly overtaxed.  That is why all of these countries are rebelling.  The US needs to immediately drop all taxes (and taxes that are not called taxes) on people making less than $50,000 a year.  According to the IRS they account for less than 5% of all taxes, so why not!?  The last Tea party was over a 3% tax.  You say the problem was just taxation without representation?  So if they were allowed to send a representative to England then they would have been glad to pay a 50% tax?  What kind of a idiot do you take me to be?

Email ThisBlogThis!Share to TwitterShare to FacebookShare to Pinterest
Labels: Politics

Cleaning up after the Palladium Virus & Cohorts

A computer recently was infected by the Palladium virus twice.  The first time Malware bytes anti-malware and Windows Defender claimed to have it fixed.  However after checking the log files I looked in C:\documents and settings\networkservice\application data I discovered that there were a lot of left over files that had the infection.  It creates random files of its infection so it can reinfect the computer.  You need to manually remove these files.

First look for the batch files, they are a 3 or 4 digit number followed by '.bat'.  I renamed one as '.txt' so I could safely look at it and sure enough it re installs the virus.  Next get the JavaScript files they are random letters followed by '.js'.  Again they reinstall the virus.  Then there was a '.dat' file also bearing the same creation date.  I do not know if it needs to be deleted or not.  Also delete any random letters followed by '.exe' files.  The anti-virus program should have removed them but there may be some left behind.  The big giveaway is the random letters and the creation date all being the date of the computers infection.

In the picture I put a box around the files left over after the infection. 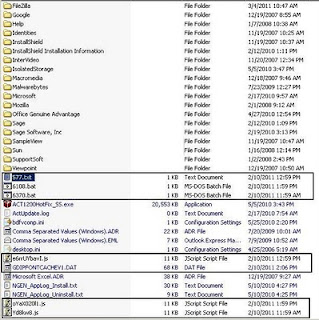 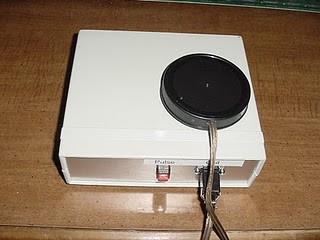 Low Power Doug Coil - Sold out.  This is modeled after the Doug Coil setup but it is a lower power version.  Basically a frequency generator feeds a Power amplifier that feeds a Capacitor bank that feeds a Coil.  The frequency generator can be a professional device or a computer program can makes any computer into a frequency generator.  The Power amplifier needs to deliver 100 volts peak to peak or be able to handle about 250 watts and it needs to be able to drive a 2 ohm load.  This is very demanding and usually a QSC amplifier is used.  The capacitor bank consists of a box having 6 switches and combinations of 400 volt capacitors to give .5, 1, 2, 4, 8, and 16 uF.  The coil is made from around 500 feet of 14 or 12-gauge wire.  It can be enameled or insulated wire.  The picture shows a switch box, a 14 gauge enameled coil as well as a 12 gauge insulated coil.  Amplifier and signal generator not included. 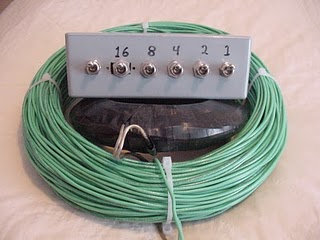 My "Keyword Analyzer Tool" or  KAT has a new home.  Its now on a new web site.  Who knows maybe soon I bill buy my own site?  Anyway here it is: http://www.davismission.org/keyword/

You can enter the name of any web site and get instant results as to what keywords are found on that site.  I made it capable of logging 2 letter words that other keyword analyzers throw out because some sites have critical 2 letter words. 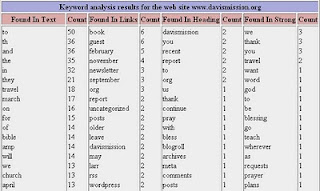