Facts about this economic depression

I am so sick of the economic depression being blamed on former president Bush. First of all congress was being run by democrats ever since the 2006 election so they were already running up the deficit. But the big problem happened in October when the media announced that Obama was going to win the election, look at the stock market index picture below. The stock market plunged when the media announced that Obama would win in October, then it plunged again when he won the election in November, then it plunged when he took office in January. Then it continued down as he had his first three months in office. JUST LOOK! The facts speak for themselves! 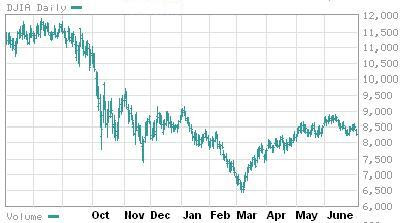 What is going to happen next? Cap and trade. Take a look and you can see that since Cap and trade started winding its way through congress, the stock market has dropped about 300 points. If Federal health care goes through it will plunge again.

The solution stop spending and cut taxes! It has worked before and it will work again.

Email ThisBlogThis!Share to TwitterShare to FacebookShare to Pinterest
Labels: Politics

Look at the stock market today after 8 years of Obama. Your theory doesn't hold up.