My electromagnetic pulser or zapper died recently. To be honest I only use it about once a month to treat some aches and pains. When I opened it up I discovered that the current limiting resistor was disconnected, the push button was disconnected and several of the capacitors were unsoldered. The main problem was that the capacitors were not all glued in place. Movement and vibration led eventually to them becoming unsoldered.

Since I had to work on it anyway I thought that I would upgrade it to meet UL standards. That includes adding a power transformer, a fuse, and some other odds and ends. The primary requirement is that it be 'double insulated'. 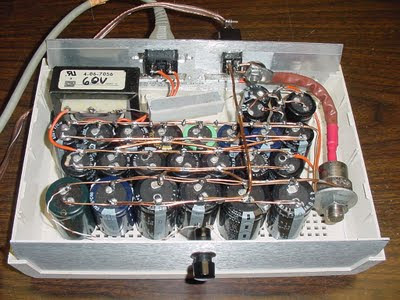 One of the first test runs of the rebuilt zapper started in Africa. I accidentally fell into a storm drain. That resulted in a black and blue foot and hip, a scratched up arm and hand. At first I just wrapped the foot, but I still could not walk. So I added a high power magnet into the wrap and within an hour I could walk on the foot. As soon as I got home a week later I used the zapper and it reduced the pain in my foot by about 80% immediately!

I dream of owning a pulser. have tried building one to no avail. whats the rating of the scr and the capacitors and the type.
Jackson