The 5 KV power supply got a big boost when I won a complete power supply on eBay for $100 including a 5 KV transformer, 100 uf Capacitor and a contactor. There were a lot more parts in there but I did not need them. I rebuilt it and almost split a soda can in half on the first test run. The video is on YouTube under bobdavis321 but I cannot get the link to copy right now. Then I tried to use it again but discovered that the power transformer was shorted and the diode was blown to bits. The problem was that there was no resistor to limit the kickback current.
http://www.youtube.com/watch?v=DocVqsdDQG8 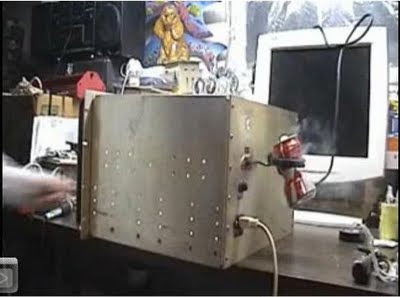 So I rebuilt the power supply using the schematic of the other 5 KV supply. This time I used a resistor to limit the charge current and to protect the diodes during discharge. The schematic is shown below. 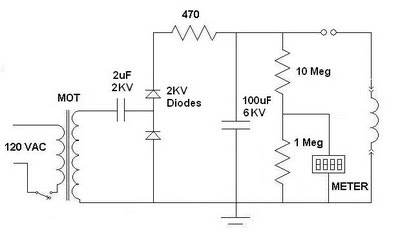 To test out the rebuilt power supply I used an apple and then a pumpkin. The apple was soft and mushy but it blew to pieces at 5 KV. The pumpkin did not blow up at all. So I filled it with water and tried again. There was a big bang but the pumpkin survived. After several tries it did split wide open as is seen in the picture below. The video is also on YouTube.
http://www.youtube.com/watch?v=RSYTqCBXRmE 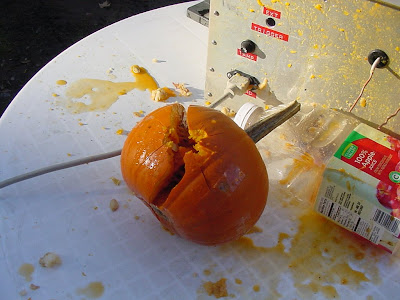 Wow this is a very interesting approach to can crushing. Would fit nicely in my automatic can crushers list http://dorecycling.com/automatic-can-crushers/