Years ago I invented an in-circuit network cable tester.  It has been on my web site for about 10 years, but no one makes anything like it.  So I thought I would re-post it to my blog as the search engines seem to find things here much faster. 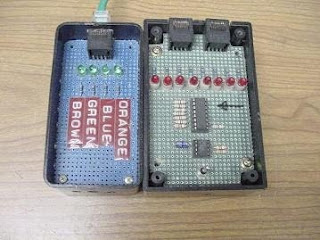 The in circuit network cable tester is only made by me and it is found no where else in the world that I know of! The in circuit network cable tester works on the principle that each cable pair is attached to a coil at both the hub and at the computer ends. So with a volt meter you can measure what almost looks like a short between the blue and the blue white wires. I eventually built this tester based on this principle because using a volt meter to test a cable was a pain in the but. This tester can also tell if it is a 10 only or a 10/100 device at the far end of the cable. A 10 only device only lights up the LED's for the orange and the green pairs. A 10/100 device will light up all 4 LED's if it is working properly. This device may fail to detect a short in some rare cases, but over 90% of the time it will tell you if there is a wiring problem. 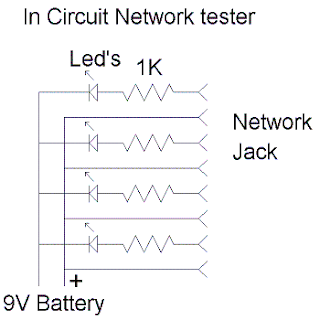 The scanning tester is also my own design but several other people make very similar devices. It just uses a 555 timer and a 4017 to sweep through all 8 wires to verify that they are connected and that they are in the right order. This is a great device for testing home made network cables or ones that may have been damaged while they were in use. It also tests and detects network crossover cables. 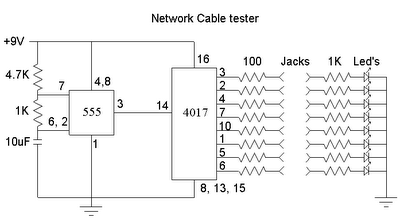