The second project at my 'new' home was to rebuild the master bathroom. The bathtub had a crack in it and the toilet rocked. The tubs problem turned out to be a water leak that had rotted out the floor under it and led to the crack in the tub – there was nothing left under it to properly support it! Before long I had removed almost the entire bathroom floor. The new floor was tricky to get in, I had to remove the door, but the tub was even trickier! The new tub was 5 foot long and the room was 5 feet wide. There was no way to get it into the room without busting a hole in the wall! The toilet rocked because the building had sank (it was not on a slab but just pads) and the toilet was above the sewage connection. The connection was all made with solid PVC, they did not put in a rubber or slip fitting so the toilet had been pushed an inch up into the air!

To fix the master bathroom I removed the tub, then removed the floor.  That left a large hole going down into the 5th dimension somewhere... 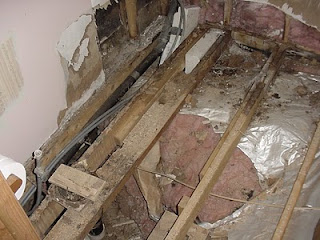 Next was to put in some solid insulation to keep the neighborhood cats and other varmits out  Then the studs needed to be 'sistered' so the new floor could be fastened down all the way around.  The seam between the 4 by 8 sheet of plywood and the additional one foot needed would have been in mid air, so I covered that stud with a strip of plywood that would be used to bind the two sheets of plywood together in the next layer. 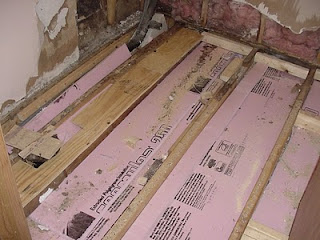 The next problem was that the new floor was not level enough so I used a bag of floor leveler to make the area under the tub completely level.  Then the tub could not be put into place without knocking a hole in the wall because the room is exactly 5 feet wide.  Then there was the next puzzle to solve.  The drain from the old tub was above the floor but the new one is below the floor.  The drain also doubled as a sewage vent so the plumbing got very trick at this point.  I kept putting all of the pieces together untill I had it right then glued it all in. 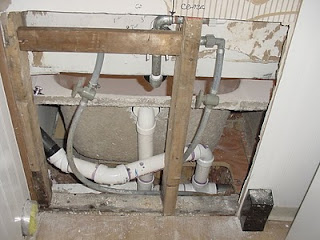 The final problem is still not fixed...the hot and cold are backwards!  I went by the length of the pipes and never checked it until it was all done.
Here is what the bathroom looked like before the tub and the floor were replaced; 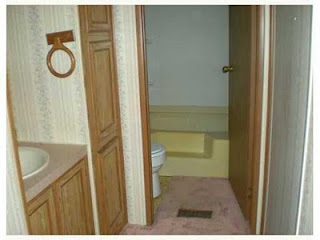 Here is what it looks like after being renovated; 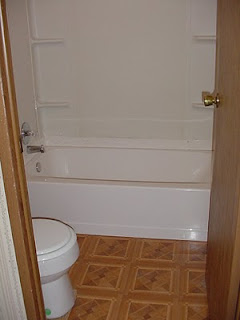 Did you use a regular tub/surround, or get one especially made for mobile homes? If so, where? We are concerned about being able to get one through our very narrow door.