'Turn your Scars into Stars'

'Turn your Scars into Stars'. That is what a counselor named Gale taught me to say a few years ago. Well that is what happened to me earlier this year.

A few years ago I visited a chiropractor where I discovered that my left leg was 3/4 of an inch shorter than my right leg. This caused a arch in my lower back and constant back pain. The cure was to wear a shim in my left shoe to try to correct the difference in length.

Last year I was in West Africa with my brother and two others. While there we were walking down a dimly lit road and out of nowhere something resembling a head and shoulders headed right for me. It was a shadow figure being lit up from behind so we could see it. I stepped to the side to avoid a collision and fell into a nearby storm drain. My foot failed to find something in the drain to stand on in order to stop my fall, so I went all the way down scraping my arms up on the pavement as I fell. My foot was a mess, but we bandaged it up and kept on going. It could not hold my weight and turned black an blue. 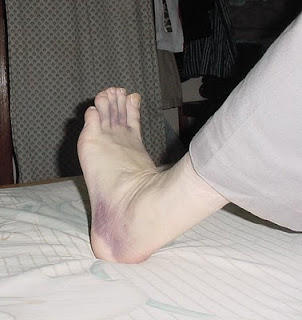 Early this year I was in a church service where the guest speaker spoke of back pain being healed. I realized that my back was not hurting and then put my feet out in front of me to discover that my legs were now the same length! Somehow having my left foot mangled made my left leg longer?

Then in April of this year I was dragging a small shed that I was removing from my property out to the curb for the garbage collector. For some stupid reason instead of pulling it straight I was twisting my back to pull it sideways. Needless to say I hurt my back. After a couple of days of really bad pain I went to a new chiropractor. He checked my legs and there was a tiny difference so he adjusted my hips and back. I told him that my left leg had been 3/4 of an inch shorter and he told me that was impossible! I told him that Dr Redding in Lima has the X-rays to prove it. he simply did not believe me!

The accident in Africa that was meant to disable me has actually enabled me. I no longer need a shim in my left shoe. My legs are within 1/4 of an inch of being the same length. What was meant for bad actually helped me.

Email ThisBlogThis!Share to TwitterShare to FacebookShare to Pinterest
Labels: Religion