I have come across this problem a couple of times.  On a 2000 dodge the resistor block is to the left of the engine just below the wiper assembly and mounted onto the firewall.  It has 2 clips that hold it in place.

On the 2001 or 2002 grand caravans it is located behind the glove box.  There are two catch pins at the top sides of the glove box that push in and then the glove box drops down revealing the fan control resistor block.  Some fan controls use resistors (That resemble coils) and some have the new solid state version.  They are interchangeable.   The resistor model may be repairable.  I think it is the thermal fuse that goes bad.  Just replace it with a new on from Radio Shack.  The fan speed control block is dead center in the picture below.  Remove two wire plugs and two screws to remove it. 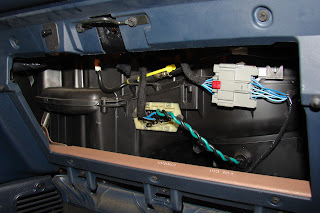 Does your Caravan have a cabin air filter? On occasion I have seen a CAF get so dirty that it either obstructed the airflow and caused the blower to spin either too slow (overloading) or too fast (bad for the bearings/brushes)... or to get sucked right into the blower. If there is no filter or it was removed, you may also be getting debris caught in the wheel.