Recently I resolved an issue that has been around for years where I work.  A year ago when we upgraded the switch in the service department two computers could no longer connect to the network.  I chased the problem down to their network cables and we replaced them.

When we moved the shipping computers to building 3, I reused old network cables and they had problems connecting to the network and the entire network had issues (The Netgear firewall called it a ‘UDP Flood’ and tried to shut it down).  When I ran new network cables to those offices the problems went away.

When I tried to connect Building 4 to the network once again we had issues and to ‘fix’ it I told the computer to only connect at 10 Megs (Not the normal 100 megs/second) and the problems appeared to go away.  The correct solution would have been to run a new network cable to building 4 but that would take too much time, because it is a buried cable!  In an attempt to make a quick fix I tried just changing the connectors on the existing cable and that fixed the problem!
After studying the faulty connectors I saw that two wires were not in their correct position within the plugs.  I have since looked at other connectors where I work and have confirmed that some of the network connectors have their wires in the wrong positions.  I have used the ‘568b’ network standard for years and it supports up to 1 gig networking.  The main offices are all connected at 1 gig.  In the future any network cable that I see that does not conform to either 568a or 568b will be replaced!
Back when I was first running network wires I was told that “any order will work” as long as both ends of the cable are done the same.  That was actually true back then but I insisted on finding out what was the correct standard and on only following that standard.  To connect reliably at 100 mps requires the correct order, and 1 gig will not work at all without the correct order of the wires.
This is one of the faulty connectors, the blue pair should be in the center, surrounded by the Green or Orange pair. 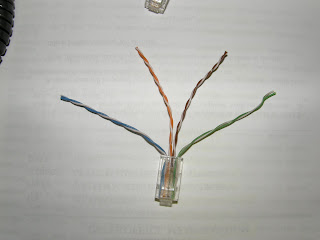 Just to be clear here is a picture of a correctly wired network connector.  Note the blue pair in the center surrounded by the green pair.  The orange pair is on the left and the brown pair is on the right. 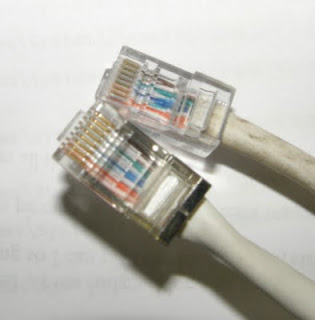