Well for months I debated between putting on a metal roof or using shingles.  Metal costs a tiny bit more but is many times faster to install.  Well the folks at 84 lumber had Architectural shingles on sale for $86 per 100 square feet.  That compares to about $105 everywhere else.

First I had to remove the flat roof over the deck and replace the last 1 to 2 feet as they had rotted out.  Then I put on a new roof using roll roofing.  Basically you nail down a 9 to 10 inch wide strip around the outside edges.  Then cover those strips with roof cement and then put the new roofing on using that cement, and nail down the top edge.  That way no nails are visible when it is done.  However it leaked the first time it rained because the cement was not dry yet in the seams. 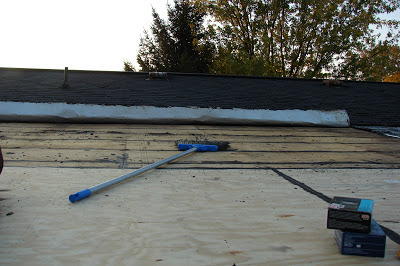 Here is the roof when it was almost done. Note that I spilled a little roofing cement on the flat roof near the ladder. 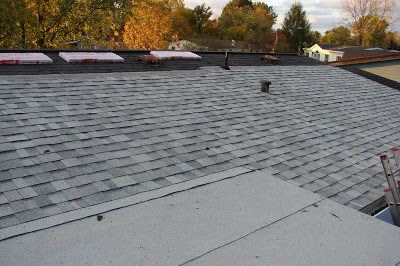 Here is the new roof once it was done on the first side.  I also replaced the attic vents because 84 lumber had them for less than $10 each and the old ones were very rusty.  The vent pipe in the middle was spray painted after this picture was taken. 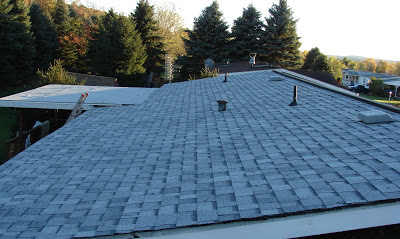 Next the car port roof needs replacing, it has always leaked.

Here are some "Before" pictures, first one of the main roof then one of the carport roof. 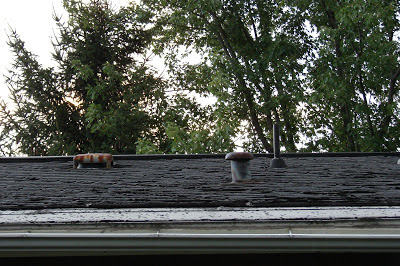 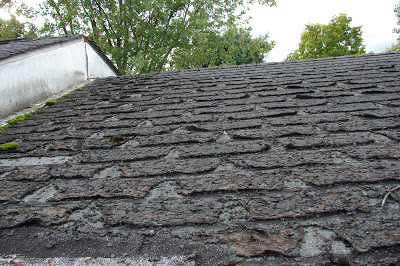 For me, a metal roof would be a good choice because they are known to endure different kinds of weather. But seeing that you’ve already installed the shingles, I can tell that it’s not a bad choice at all. The new roof actually looks sturdy! Even though you did encounter a problem on the first day, it is good that you managed to finish the job. Congratulations on completing the new roof!

The pictures of your roof before you replaced it is almost heartbreaking, Bob. I can see that the shingles were already rotting, and there’s already algae growth. It doesn’t matter now because your roof has completely transformed! Did you do this alone? If you did, give yourself a pat on the back for a job well done!

That is one huge transformation! The whole place was brought back to its usual and attractive appearance just by replacing its evidently old roofs. Very Nice! You guys deserve a pat on the back for properly installing this lovely roof and for making the whole place good as new!

Job well done on your roof project! Looking at the before and after pictures, I can see a significant improvement in terms of aesthetics and quality. And good move on the metal shingles. Aside from the convenience of installation, metal shingles offer durability and complement any type of structure and architecture.

Your old roof shingles really looked like they need a replacement already. Anyway, it seems that you made a good deal with that discount. :) Also, keep your shingles mold-free by regularly maintaining it. This can also lengthen its life service.