The Most Difficult QSC 1400 Amplifier Repair yet

I was tempted to call this the 1400 amplifier repair from hell.  It needed more repairs than any other amplifier that I have fixed in the past.  It started off with the usual 3K at two watt resistor being fried.  That caused one of the OP amps to have only four volts on pin eight instead of 15 volts like when it is working properly.  Simple enough, replace it.  I did not have a 3K two watt resistor so I used three 1K one watt resistors in series.

When the amplifier still did not work, I checked the 3.9 volt zener diodes, they another common part to fail.  However they were both good.  Then I noticed that the idle output of the OP amp was at three volts.  If I remove the OP amp, the positive input was still at .3 volts, that in turn would cause the OP amp to output 3 volts and that pushed the amplifier output to over 30 volts at idle.  So where was the .3 volts coming from?

First you need to know that QSC amplifiers work like no other amplifier.  The "ground" floats, the output transistors are directly mounted on the heat sink without an insulator, there is no center tap on the power transformer to be a ground.  So a ground reference is created with two matched resistors, one to +75 and one to -75 volts.  The middle of the resistors should be at zero volts.  That was where the problem was, one of the two matched resistors was open.  I had to replace both of them so they match, and I did not have 47K at one watt so I used two 100K at 1/2 watt resistors in parallel for each of the two 47K resistors.

Here is the schematic, I circled the blown parts in red.

Here is a picture of the repaired amplifier, red arrows point out the replaced parts. 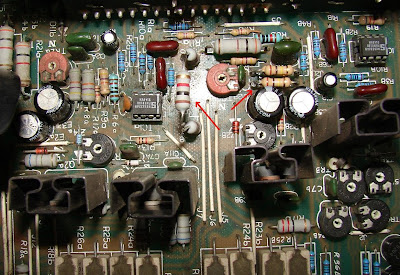 Now I said this was a difficult repair, that is because there were two other repairs that I made along the way.  At some point I noticed that there was a resistor that was not properly soldered in.  When I soldered it, the amplifier went into shut down and would not power up.  The next problem turned out to be a bad connection on the heat sensor that is mounted on the heat sink.  With those two additional repairs, the amplifier was finally up and running.

Hi,
I'm a DIYer but probably not as advanced as you. I have a QSC 1400 dated 1992. It used to be in a theater untill it got shut down in 2000. The right channel recently will cut on when you turn it up, afer that ou can turn it back down. It will once in a while cut out again if it stays at low volume.
Could this be a resistor or a lose connection somewhere.

James, it sounds like a bad connection to me.

Sounds like they switched between 47pf and 100pf. It is likely either one would work.

I have qsc 1400 too. It has problem that 1 channel works for i while, when its warmed a little then it starts rattle noise and fades down..So it is really annoying.
Can you tell what coud be the reason?
Capasitor??