I have preferred Sony cameras for years.  I once saw a Sony camera that produced a picture that was much better than what I could see with my eyes and that sold me.  I have owned several Sony cameras over the years and now I have a Sony A330 DSLR camera.

The DSC-H2 runs off ordinary AA Cells.  It makes a great backup camera.

The DSC-H10 is a little plastic toy.  The flash quit after a couple of months.

The Alpha A330 is a nice DSLR.  However it does not do movies.  The standard lens does not do zoom. It is my first professional camera with a interchangeable lens.

I have recently added another camera.  It is a Sony Alpha A3000.  The A330 does not do video, the A3000 does.  I thought I could use my old lenses, and you can with an expensive adapter.  However for a little more than the price of the adapter I also bought a standard lens for the A3000.

These pictures have the Alpha A3000 on the left and the DSC-H50 on the right. 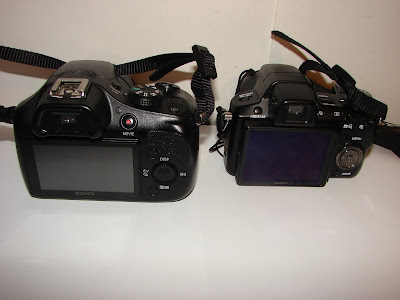