MY latest home improvement - removed wall for an "Open Concept" 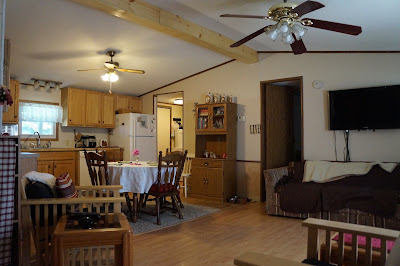 Being a mobile home there was already two 8 inch by 2 inch laminated beams down the center.  There was a one inch gap in the center between the beams that was filled with plywood to bring the beam size to 8 inches by 5 inches.  The existing wall was not a supporting wall as it was only under one of the beams and was made out of two pieces, having a top and bottom half.  The beam was then covered with 1 by 8's to make it look better.

To fix the floor was a little bit tricky as the flooring material was no longer available.  I found some similar laminated flooring that almost matched the old flooring and then used that.  I used a real oak bridge to fill the gap between the laminate of the living room and the kitchen flooring.