I recently received a shipment of LED Projectors, they are 2000 lumen Pyle PRJD907's.  They were all sold "as-is" broken but they were easy to fix.  One had a bad soldering connection in the power supply.  They all had loose power supplies, the mounting needs to be improved.  I glued the power supplies to the light cover at the end closest to the heat sink.

This picture shows what is inside the projector.  At the back is the LED heat sink with cooling fan.  In the middle is the LCD screen.  At the front is the projection lens. 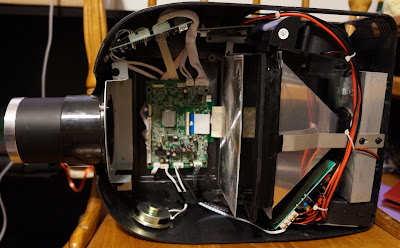 This is what the projector guts looks like when it is running. 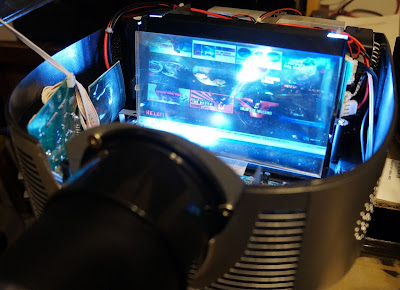 Here is the video on YouTube.  I hope to compare several 2000 lumen projectors at a time in the near future.  I have also ordered a light meter so I can find out what the actual lumens is for each projector.

I have managed to find a place where I can compare multiple projectors.  Here are a couple of videos showing 3 projectors at a time.

The Crenova XPE460 is the best under $100 projector in my opinion.  They have replaced it with a newer model the XPE480.