Update - After two months the car lost 2 quarts of antifreeze so I am trying another solution.  To be honest I did not follow the K&W directions completely.  Like you cannot leave the thermostat out of an HHR or it will leak badly.  See https://bobdavis321.blogspot.com/2017/10/more-problems-and-another-solution-to.html

My HHR overheated at a red light.  With the heat on I was able to get the temperature down to 235 degrees.  I added a gallon of water but two days later it needed more water.  Then I noticed that it was leaving puddles of water in the driveway under the exhaust pipe and spraying water 2 feet out from the tail pipe.  Then I saw the water bubbling in the radiator cap.  Is that absolute proof that the head gasket is blown?  After some praying and searching I used K&W Head Gasket Repair and now it is running fine again. 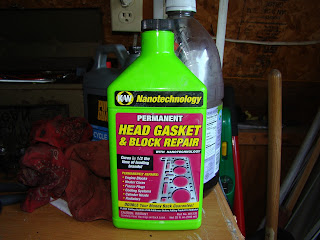 The directions require that you drain the radiator first and fill it with water.  Finding he drain in the HHR is next to impossible.  You cannot see it from above or below.  If you pull back the radiator plastic cover on the left side you might see one white plastic ear.  It is barely reachable but it can be removed.

This video shows the bubbling.

The thermostat is also next to impossible to reach.  You will need a 10 mm socket and several extensions to get to the bolts.  You cannot leave the thermostat out as it will leak.  The seal is part of the thermostat.  But opening it up makes it easier to flush the cooling system. 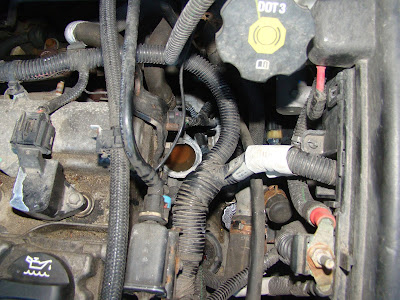 After running the car for a while you once again drain everything and refill the cooling system. I did not think it was fixed because it was still running over 210 degrees.  However the radiator cap now had a seal when you try to open it.  Over the next few days of running the temperature slowly came back down to normal 196 degrees.

These cars run hotter than normal because the thermostat is on the return line from the radiator.  If the radiator offers 16 degrees of cooling then a 180 degree thermostat will allow the water to run at 196 degrees.  It gets even hotter while sitting still because the radiator fan does not come on until it reaches about 220 degrees.