Even More Arduino Uno With WS2812 LED Strips and Arrays

I have also made a larger higher density LED sign.  It features 90 LED's per row and 16 columns.  That is 1440 LED's.  It is running from an Arduino UNO.  Last night with some adjustments to the timing I was able to get it to work.

The software now supports a different color for each letter as in this picture. 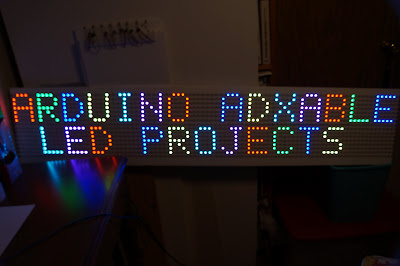 Here is the shades of color test, it supports 256 shades of each color. 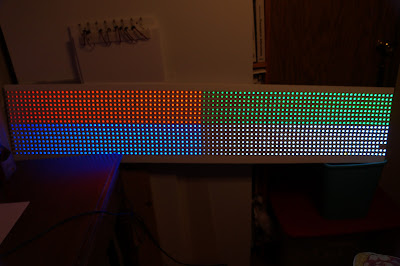 Here is a video of it displaying text and running the color test and fireworks effect.

Later on I was able to get the sign to scroll.


Now it can be programmed from a cellphone via bluetooth!


Now you can change the color from the phone.

Hello. Im trying to control about 1200 leds for simple rainbow function on my roof ceiling but the memory is not nearly enough. How are you controlling this many?

I am using parallel operations to send 8 bits at a time. The code is on github.com/bobdavis321