I am updating the 6DOF Servo Arm project.  The old arm had some issues.  Like the servos at the wrist position jammed on each others limiting the range of motion.  Here is a picture of the old arm. 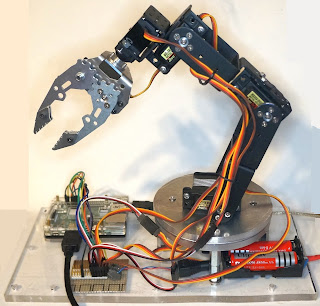 This is what the new arm looks like.  Note the spacer in the middle and how the last two servos are connected together.  This arrangement gives a much better range of motion. 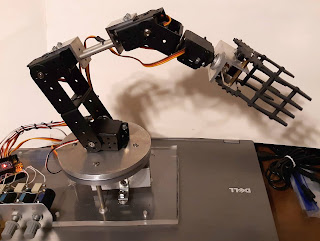 First I need to improve the "Claw".  The clear plastic claw looks better if it is painted black.  But the plastic where it attaches keeps breaking, so I made an aluminum bracket to do the job. 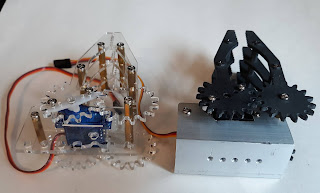 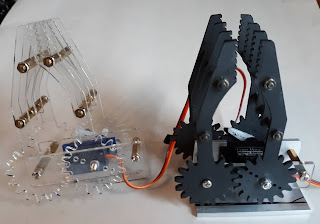 Then I needed to improve the controller.  The servo or I/O shield for the Arduino has many issues that I have covered in another post.  I thought I would use the Nano Shield as the Nano has two more outputs that ne Uno.  Those being A6 and A7.  That way it can run 21 servos!  But the Nano shield could not even run six servos without smoke rolling out of it.  The problem is that the five volt power source on the shield uses the five volt regulator located on the Nano and it is woefully underpowered.  To fix it I cut the run to the 5V pin of the Nano (Circled in red in the picture below) and then jumpered the power input to the 5V terminal.  At first I had jumpered the VIN terminal to the 5V terminal, but then smoke rolled out of the diode that is between the input jack and the VIN pin to protect against reversing the power.  That diode also costs you about 1 volt of power to the servos and at four volts they do not work very well at all. 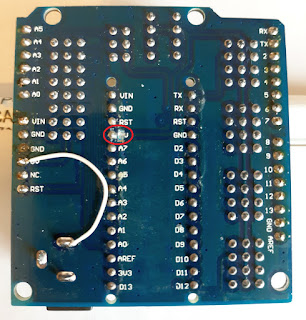 A video of the first successful test run is on YouTube: