Rebuild of the 17 DOF Humanoid Robot found on eBay

In my book "Arduino Servo Projects" I made all kinds of Humanoid Robots.  But none of them were the 17 DOF Humanoid as is found on eBay.  I just could not get it to work.  It has a high tendency to fall over a lot.  In this guys video it fell off the table: https://www.youtube.com/watch?v=-gQDgxQkX-w !  So I spent some time trying to fix him.  One thing I noticed is that his legs are too long.  Even with the higher power MG958 servos when he falls over and I pick him up the servos then go to where they were supposed to.  The servos just cannot lift his weight!  Then as I was studying him I found the mistake!  Can you see it in the pictures below? 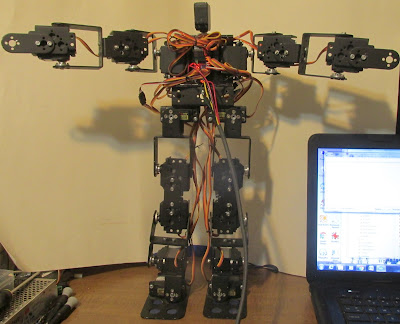 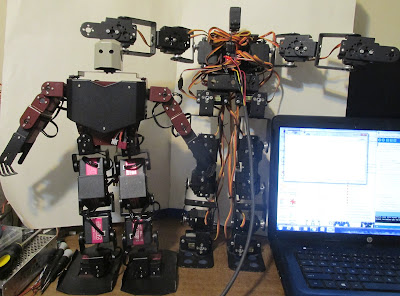 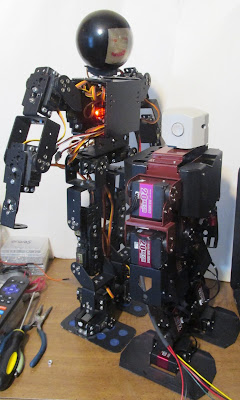 Did you find the problem?  I circled it in red in this picture.  The servo is mounted upside down! 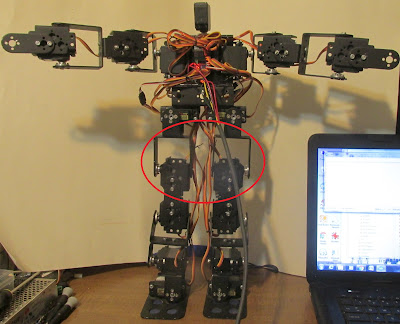 While I was at it I also changed his chest.  The goal there was to make it more like the one that comes in the kit on eBay.  The only difference now is that his head is 3/4 of an inch taller.  I had to move the electronics to the front too.
This first picture is of the new chest bracket on the right.  It closely matches the kit on the left.  The chest is made out of a 3.5 inch piece of three inch by one inch C Channel aluminum.

This is the old chest bracket on the right.  The arms were located higher up and one inch forward of the kit design.  This gave lots of room for the electronics in the back.