Yes I bought a New-to-Me 2011 Chevy Equinox knowing that was a problematic year.  The crux of the issue is they added a high pressure fuel pump that overloads the timing chain that then fails.  It has a new timing chain, actually the previous owner had it replaced twice!  It also had fuel pump issues and a bad catalytic converter.  On top of that it stalled every time you slowed down or stopped. 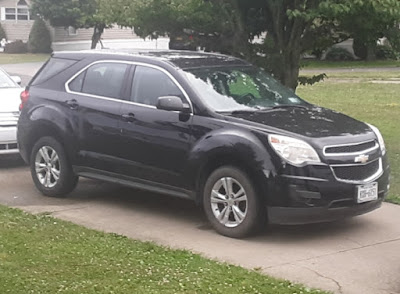 My mechanic friend replaced the Variable Valve Timing selenoids and now it runs much better.  They had been replaced SEVERAL times before.  Use premium ones!
Next I added Dura Lube Severe Catalytic & Exhaust Treatment to the gas.  After about an hour of driving the check engine light went out so I quickly got it inspected.  The check engine light has stayed out and there are no error codes other than an occasional fuel pump error.

Then the next day the starter died in my driveway.  So I repleced the starter and the car was back up and running.  It took an hour but the ground clearance is enough that you can do it without jacking up the car.
Then I added an oil catch can to reduce the amount of oil that is sucked into the engine to clog the catalytic converter. 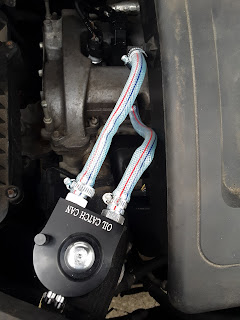 Next up was replacing the fuel pump and checking the PCV valve opening on the intake manifold.  I also got pictures of the intake valves.  The pump was easy to remove.  In fact it was too easy.  When I went to put it back I discovered that the screws were badly stripped!  Then I notice that the old pump O ring was shot and that oil had been leaking down the front of the engine! 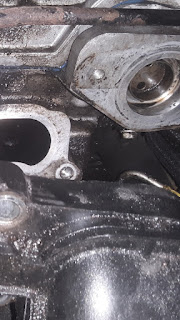 The fix I used was to use some 7/16 screws instead of the 10 mm screws (on the left in the picture).  I did not have a tap so I put the 7/16 inch screws in about 1/2 an inch then tightened nuts on the screws to hold the pump in place until I can properly tap the holes. 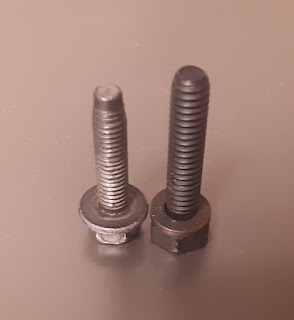 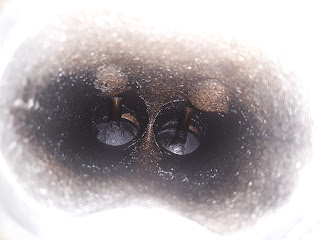 This picture shows the oil that had been leaking down the front of the engine.  The oil filter cap is also messed up... 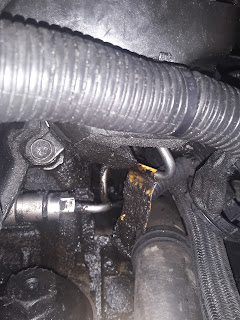