I thought I would update this post by showing a map of the US and the locations of all of the earthquakes that have happened in just the last week. It is getting crazy. They are now predicting a volcano in Alaska as well as Yellowstone. What about southern California?? 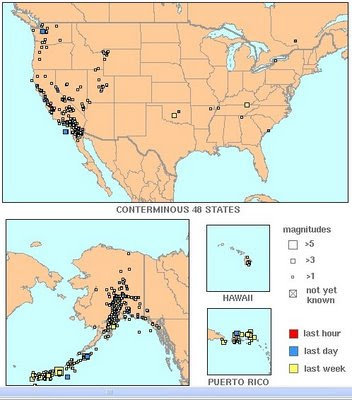 Rumblings, that's how I would describe it. In the news just a few days ago there was a report on the rumblings at Yellowstone. They quieted down on Jan 2 but rose up again on Jan 9 then quieted down again. The picture below is from Big Hole Peak Montana where there are rumblings going on now. As you can see after a few hours it quieted down too. What is going on here? I found similar results for January 2 and December 29 th.

If we hop over to Whitefish Montana there is something going on there too. This is more like an earthquake or more like a swarm of them, smaller ones at that. This has been coming and going for a few days now.

What do I think about it? I do not have a clue. Someone speculated that it could be caused by waves of magma moving. There is no evidence as to what it is. I read someplace that it could just be miners blasting, at least the collection of smaller earthquakes could be that. Who knows but there is something unusual happening.

Here is a link so you can check them out for yourself.
http://earthquake.usgs.gov/eqcenter/helicorders.php