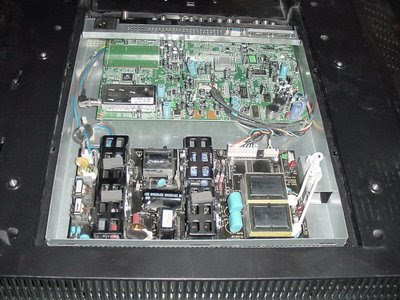 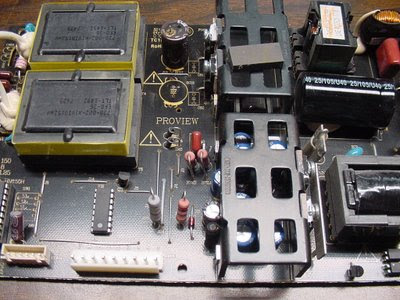 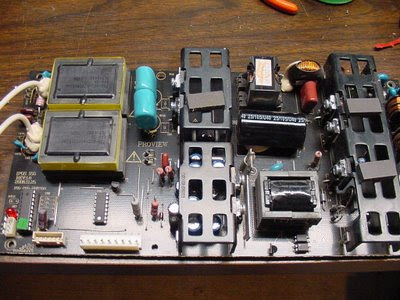 I am so glad you wrote this article. I was shocked that my Element FLX-3210 32 inch LCD TV has the same PCB power supply as your LCD TV does. I had both capacitors go bad as you did.

When I experienced the slightly dim white in the middle as you did I thought it was because I pushed to hard when cleaning it lol. The caps did not go bad until five to six months after the dim issue.

Tonight the TV went black, and when I turned it off and back on it was real dim where I could hardly make out anything especially in the middle. After two seconds it turned back off.

After I took everything apart I seen the same black smudge at the bottom of the caps, and the top of the caps were expanded. When I showed my dad he knew right off that was the issue, and showed me this article.

I do have one question. Why did you go from 10 uF 450 to .47 uF at 400 volt? I am thinking about doing the same thing and going to paper caps as you did as well. I just didn't know if it would be different for me.

Thanks for taking the time to write this article. I apologize for the lengthy reply.

Hi there. My name is Carlito and I'm from Spring Park, Minnesota. Two months ago I plugged in my laptop to my LCD TV (Element FLX-3210). I forgot to change the power setting so after a few minutes my laptop switched to hybernate mode. Suddenly the screen on my TV flashed a warning that says "No input detected, tv will shutdown", so it did. I changed the setting for the laptop but when I tried to turn the TV on, it wouldn't turn on. I tried to look for an answer in the internet as to why it happened only to find out that my problem was common for a lot of people with the same TV set.

There was one website that I checked and some tech guy was saying that it could be a power supply problem but he never elaborated on the topic. Then I found this blog, thank God. Looking at the photos on your post, I am pretty sure that your TV and mine have exactly the same PCB power supply. (i was able to crack my tv's back panel by the way looking for answers (hahaha).

Do you have any suggestions as to where to look for problems and where to buy the right components. I have a little bit experience in soldering components to PCB. I use to repair GSM cellphones back in the Philippines. And most of my life I worked as a Musician/Worship leader in the church so I have a few experience repairing simple electronic circuits such as electric guitars and so forth. Might not be enough but if you can instruct me on what component to desolder or resolder I can give it a shot. I would consider this a DIY project. My wife said she is buying a new TV next week. But if you can help me pull fix my TV it could save us a lot of money. I hope you don't fall a sleep reading my comment. i wopuld appreciate all the help you can give. Thanks and God bless you more for taking the extra mile to help other people.

I've searched the Internet and cannot find the specified paper type capacitors you used. Do you have a source that you could post here for future reference?

1uF at 400 volt capacitors are available on Ebay for about $5. You can also try MCM electronics. The .47's that I used may leave a dim area in the center of the screen.

We had the same problem with the tv last year when it was making a humming sound and followed similar instructions. Now the TV wont turn on--no little blue light when off, nothing. We took off the back to see if the same thing happened--one of the caps was fatter/expanded at the end so we replaced it and thought that was the problem--only still no luck. We switched out the power plug from another tv and still no luck. Any thoughts? Thanks

Hi Robert how are you, I check all kinds of information on the web, and lucky for me I tamien Ihave one of these teams, whitch when connected to the sistem LED lights RED, and THE POWER order LED turns blue, but does most anithing.

I have little knowledge in Electronics, remove the back cover of my equipment, and saw that everithing apparently was fine, including capacitors you mention, of 10uf at 450volts, chec widh my capacitometers both with and recorded them in good condition,

I realized that F-2 was srong because it was open or not driving, and this goes down, that the Q-17 and Q-18 were is short.

Replace these for about the same, tuition FQPF9N50, and the device does not work ihave no lumination BACK LITE,fault monitoring and cheking my IC-8, which is the oscilator for them to work , Ihave doubts of it, up there I could forward motion.

I would ask your help that I can check for you but not throw them away.
German Greetings

so, If cant find 1 micro farad at 400vs >> to replace the 10uf at 450 >> what two capacitors can>> i put together to reach what i need? should i use not polarized capacitors?

You can use polarized capacitors but they might fail just like the first ones did. You can use two .47 at 400 volt capacitors in parallel?

so, you wont me to use two .47 at 400 volt capacitors in parallel (so, a total of four capacitors two pairs?>> > polarized or not polarized? paper type or ceramic or? If i cant find that exact capacitor>> is there any other combination's? OR ideas you might have?

Bob,I really needed the help you've posted on the 32" LCD Polaroid TV, replacing the capacitors that light up the screen. I have a question if you don't mind.Will the orange drop type capacitors work for this fix If I use .47 uf 400 volt capacitors? I can soldier but not to good deciding what capacitors to use. thanks

Its best to use two (one to replace each bad cap) 1uF (or 2.2uF) 400 volt paper capacitors, they are available on Ebay. They are sold for use in speaker crossovers.

By the way, the repalcement caps in the picture are not paper caps (paper caphas short life span due to acid in the paper), they are Metalized Polyester Film type cap. Using 0.47uF or even 1uF will not be good enough to filter out the AC ripple. The main key for the repalcement electrolytic caps used in the switching power supply are that they must be LOW ESR type.
See my album of failed TV's and Monitor at Photobucket.com, user name budm

Hi Bob,I went back with the same type & size caps that came in the tv, it brought the picture & sound back on..but I still have the smuge streak down the middle of the picture.So I'm gonna hang on to your info & when I get around to it I gonna go with metalized polyester .47 at 400 volt & see if it clears the smuge line up.Thank you Bob.

Duckman - I have a smudge down the center too. I do not know what causes that?

I changed 1 cap and the red light is flashing on the circuit board. What does that mean?

I changed one cap and now the circuit board light is flashing .. what does that mean?

I do not know what is causing the red light to flash, but I suspect there is a short or something.

I do not know what is causing the red light to flash, but I suspect there is a short or something.

Hello I have this same tv have had it for a while the picture went out a few weeks ago I replaced the entire board and it will not even power on at all now... can you please help

Hello... I have this same tv have had it for years now it recently started smoking and the picture went out the sound was still playing, eventually it lost power I replaced power supply board and still nothing... can anyone tell me the problem... please...