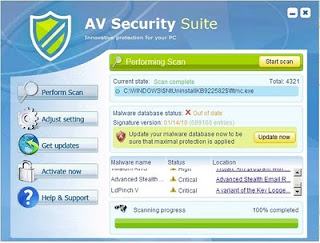 Here we go again - another fake anti-virus.  This one even opens up porno.something just to make matters worse.  This one has a weakness.  As soon as Windows starts hit the three finger salute - alt, control, delete, and bring up task manager.  Shut down all the trash and then install MalwareBytes Anti-Malware from a USB drive.  Run it and remove some junk.  Then update it and run it again and remove more junk.  Then Install BitDefender Free and update it.  It found about another 9 items including a rootkit.  Now the computer might be safe to use?????

You might get a warning message saying that everything that you try to run is infected, don't worry, let it run, it is just the virus trying to prevent you from running anything that might remove the virus!