This device has been improved upon.  See the improved version.

Back in 2000 I wrote an article for Nuts&Volts magazine about predicting earthquakes via a electromagnetic monitor.  Back then the EM sensor rotated through 180 degrees taking readings as it went.  That was because EM sensors were expensive.  Today they are cheap and I am working on a new device that uses 8 sensors in a circle.  I am not sure If I should read them or take their difference and read that?

My article: http://gramlich.net/projects/nuts_and_volts/downloaded/apr00toc.htm
This is a picture of the device that was published in April 2000: 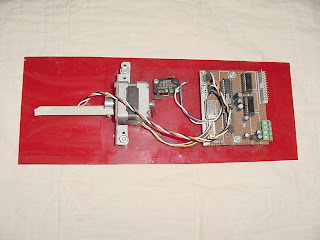 Since my article was written several others have written on this concept.  According to Wikipedia there is even something called the VAN method of predicting earthquakes: http://en.wikipedia.org/wiki/VAN_method

My method is superior because it involves using magnetic field sensors and recording them like the seismometers that are currently in use.  I will upload pictures shortly.  I am using a Arduino as the recording device then via USB it is sent to the computer.  This is an earlier picture of my no-moving-parts setup: 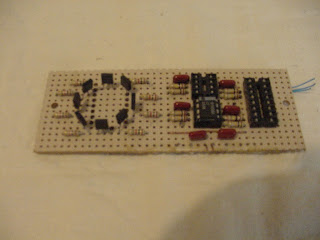 Those are UGN3503 Hall Effect sensors arranged in a circle.  The op amps are dual versions like the LF 353.  Here is the updated photo.  Why do I still have that green LED there on the Arduino? 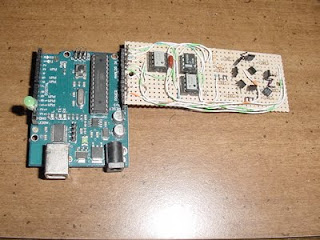 I came up with this idea over 10 years ago because animals behave strangely before earthquakes.  They know something is about to happen.  I also know animals can navigate magnetically.  If you put baby sea turtles in a pool they will swim east to west.  If you add a magnet the will arc around it.  That why you can take a dog to California and it will find its way back to NY.  Then I discovered that there are many magnetic abnormalities around the fault lines.  At that point I added the quartz into the equation and came up with this method of predicting earthquakes.  How accurate it can be in predicting earthquakes is yet to be determined.

Here is the Arduino code to read the 6 analog ports:

This is what you should see on your screen.  The OP amps are connected with 1K from the sensors to their negative inputs and 100 K to their outputs for a gain of 100. The positive inputs go to a 2.5 volt reference. They were needed to increase the sensitivity.  The Arduino's 6 analog input ports are connected to sensors for North, South, East, West, up, and Down. 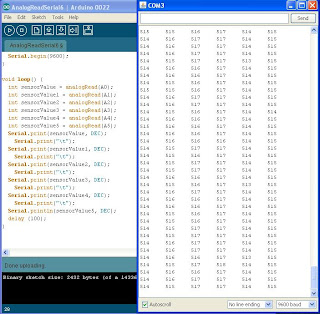 
Now I am waiting for someone to give me several million to set up sensors all along the major fault lines to monitor the magnetic fields and see if it is possible to predict earthquakes that way.

Here is the schematic diagram.  One of three circuits is shown.  The OP amps are powered by what is marked as 'Vin' to the Arduino, that should be about 9 VDC.  The gain of the op amps is about 100.  The 2.5 volt reference can be two 10K resistors in series, but you might want to add a trimmer to adjust it so that the output of the op amps average around 2.5 volts.  With this setup the sensitivity is still on the low side of what it should be. 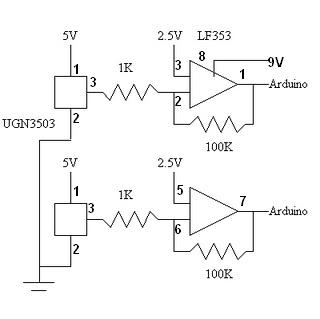 Email ThisBlogThis!Share to TwitterShare to FacebookShare to Pinterest
Labels: Arduino, Earthquakes and Volcanoes

I just added a schematic. I see I forgot to mark the pin numbers for the Op Amps.

can you post the complete schematic and components of this device..your help will be really appreciated.. =)

can u pl give the full details sir.v r very eager to read this paper

can you please post the full report about this topic

can you provide the circuit diagram of this topic

sir
please send the full report of this topic

Pranika, isn't there enough details in the articles on my blog?

By the way my design is likely not sensitive enough. So far it has not predicted anything.