As promised I will tell you about my experiences with the 8108 or SC8108 Network Cable Tester. I bought it on Ebay for around $50, that is a far cry from the price of some cable testers!

The first feature that the seller did not list is that the remote beeps when it is connected to the right cable. Basically you install the remote in the persons office that you want to check the cable. Then you go to the switch, see what light is out, and plug that cable into the tester. The remote will then beep to let you know you have the correct cable. You can then run two tests on the cable. The tests will tell you if the cable is wired correctly and the length of the network cable. I had several cables that were not wired correctly, but two of them, after looking at the map, were wired as crossovers. That used to be the norm when running from switch to switch.

Basically I give the 3LW 8108 or or SC8108network cable tester two thumbs up. 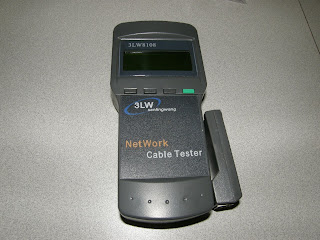 Was there anything I was disappointed with? Yes, for one thing if you leave the computer plugged in at the other end, then the only test that you can run is the network cable length test. That is helpful to let you know how long it is to get a good idea as to who's office it goes to. However, with some network cards, it will come back saying that there is a "short" in the cable, when there is actually nothing wrong with the cable. This problem has something to do with the network card at the far end.

I never thought that thing is real. Is it available in Networking cable Online Shop in UK?

Yeah even cable certifiers will show shorts when connected to cards or even from pc to switch or smart jacks for t1 except onley 1245 so just use the other wires to judge mostley look from station to switch does ot send tone?