My old 8 capacitor power supply is back in action!  This time it has 10 capacitors, and delivers 2000 volts at 1600 amps from 1,600 uF of capacitors in a series/parallel combination.  The old 5 watt resistor was replaced with a 50 watt resistor!  It still smoked when it was powered on, likely from the grease from my fingers. 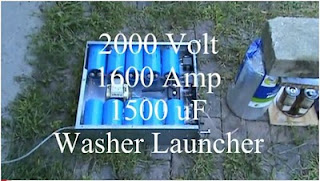 The video is already up on YouTube.  It is at: http://www.youtube.com/watch?v=i87EuYIQO9c
I tried crushing three soda cans at once, a free launch that went way out of site, and upset the neighbors, you can hear them saying "What was that?" and then I crushed one soda can.  Not included in the video is another free launch where I lost the washer.  It was found later over 100 feet away on the far side of the house.

This is the schematic diagram.  There is an error, the capacitors are only 4700 uF!  The 'fire' resistor is 1K, and the meter resistor is 2.5 meg ohms, that value varies with the meter that is used.  There is also a 10 amp fuse on the power coming in, it is built into the power jack.  The coil is a flat coil of 14 gauge enameled wire covered in a lot of glue. 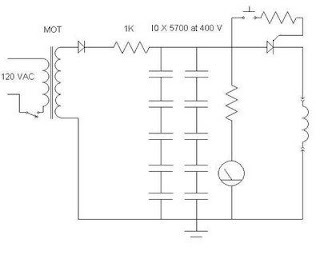 What kind of SCR did you use? I made something similar with a big $40 hockey puck SCR that blew out after the second or third use. Maybe it was not mounted properly or maybe the load impedance was too low. In any case, I would be interested to know which SCR you used and where you got it from.

Yeah, what kind of SCR did you use?
I'm jealous right now... Lol!

Great work BOb Davis, keep it up.
can u tell us what the part number of SCR that used in 2KV launcher.