Well after all the $30 a month straight talk cell phone problems I tried to get service from Verizon.  I thought a land line would be nice and for $50 they promised to include unlimited calling and high speed Internet.  So far my bills have been $75 and $89 and the Internet speed is .03 Mb/s, slower than dial up!

I printed out the screens, and waited.  After a week or two I called and they said the order was lost so they started another order.  But I was told the $50 deal was no longer available. 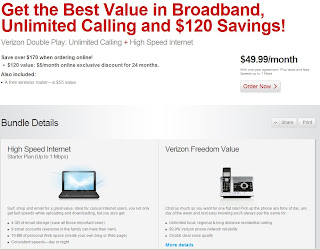