Someone asked me to fix a HP1502 LCD Monitor for them. When it was plugged in the power would only flash on for a second. After opening it up I could see that all the capacitors in the power supply were blown. There were two black 1000 uF at 16 volt capacitors that I removed before this picture was taken. There were 6 purple 470 uF at 16 volt capacitors that also needed replacement. However even after all of that was done, it did not fix it the monitor until I removed the fried zener diode that is located just below the burnt spot on the power supply board near the connector between the two boards. You can use a 12.6 volt zener to replace it but it works without any zener diode. The zener diode was most likely used as a surge suppressor and since the capacitors were not working that allowed non stop surges above the zener's rated voltage until the zener finally fried. 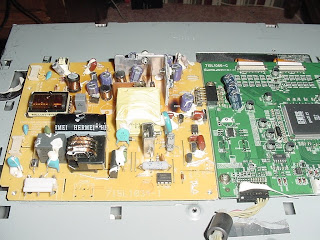