I am working on what will be the biggest washer launcher or can crusher that I have ever made. If you have not seen the old washer launcher or can crusher videos on YouTube you have to see what happens when 800 volts DC is applied to a flat coil under an aluminum washer. The washer flies over 30 feet straight up. If a soda can gets in the way it can get flattened. If you place a soda can on top of the washer it ends up about 1/2 inch shorter just from the g forces.

As I was going though some of my old pictures I could see the history of my invention. First I built what was called a 'thumper' on the Internet. To make a 'thumper' essentially you take the flash from a camera and add a coil in series with the flash tube. This 'thumper' design is available on the Internet just google for a 'magnetic thumper' or 'magnetic thumpy'. Below is a picture of my version of that device. 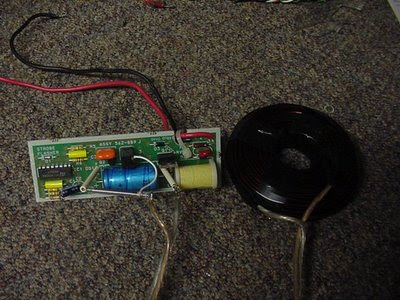 Next I replaced the flash tube with a big SCR. I had a pile of those big SCR's that were left over from making a time machine, but they were accidentally sold at the Rochester Ham Fest in around 2005. You can see them in the background of the picture. I also started adding more capacitors. Notice the home made aluminum washer sitting on the coil. That was from before I discovered that hard drive platters make great aluminum washers. As you can tell I was already sending aluminum washers into flight. In those early days the washer flew just a few inches. 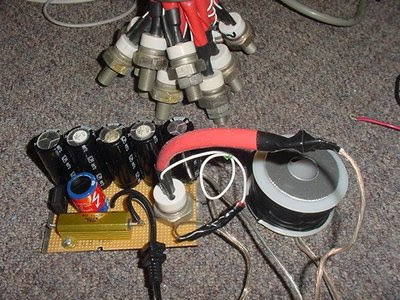 Soon I took the washer launcher to the next level. First I used 4 big capacitors and then later I stepped up to 8 of those big capacitors. I fried the old SCR and then replaced it with an ED431825 that can handle 1.8 KV (1800 Volts) and 250 amps continuous and 6.5 KA peak (6500 Amps). This design started out with one MOT (Microwave Oven Transformer) then for a while it had two MOT's. 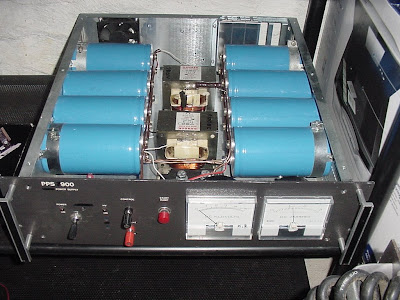 At some point I added the flat Coil shown below. It was wound a few turns at a time then those turns were glued down and the next few turns were added. A rotating stick held the wire down while the glue was drying. The glue was of a flexible kind. At some point the wood was shattered into pieces, so it was replaced with Plexiglas. That was a bad idea. The Plexiglas shattered on the first test launch. 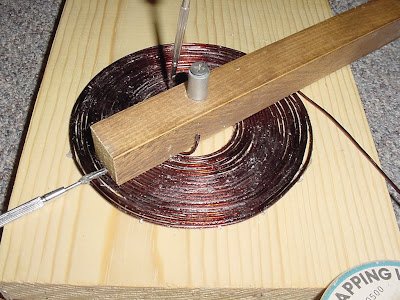 I am upgrading the 8 capacitor 800 volt model to now operate with up to 1600 volts. All of the capacitors had to be turned 90 degrees so that they can be connected in series instead of parallel. Here is the preliminary schematic, it is missing the 10 amp fuse, and that is a 1 meg resistor to the voltmeter that is located on the front panel. 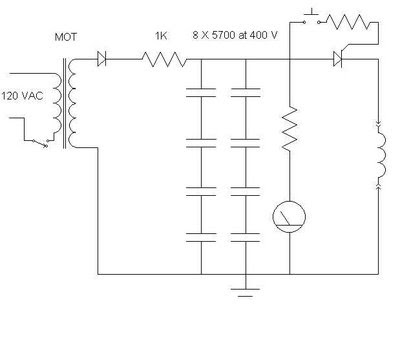 There were two problems with the first test run of the new design. The 10 amp fuse blew because it now draws more current than that. I replaced it with a 15 amp fuse. The next problem is that the meter pegs. I was using a digital volt meter as well and it was not supposed to exceed 600 volts but it survived at 1200 volts. As far as the can crushing goes it did not crush it much more than the 800 volt model had crushed it. 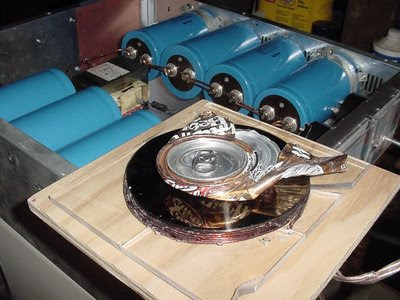 Before testing it a second time I changed the resistor to the meter to 2.5 meg. The meter now reads 2.5 KV full scale. I also shortened the wire to the coil to 1/2 of the original length. The next test was at 1.6 KV and it resulted in the flattest soda can yet. The video is being
uploaded to YouTube.

A few years ago a relative, Ernie I think, gave me a sign that someone was throwing out. It was large and had a car repair place advertisement. Well I removed the guts, got it working, reprogrammed it and put it in my own cabinet. The problem now is that it is too big to fit in the window. 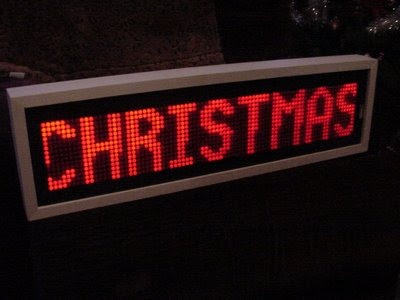 As I was testing it out our cat Bling or as I call him stinky, decided to attack the sign. He normally attacks my laptop computer screen climbing on the keyboard as he does it. 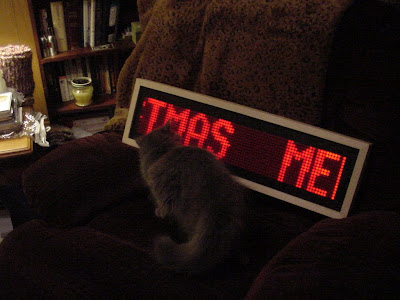 I had to rearrange the guts to make the sign smaller. I moved the logic board to be behind the sign board. The transformer did not fit so I put that on the back side. The brown board has a 555 and a 4017 that resets the sign after 20 seconds so the car advertisement does not come up like it used to. 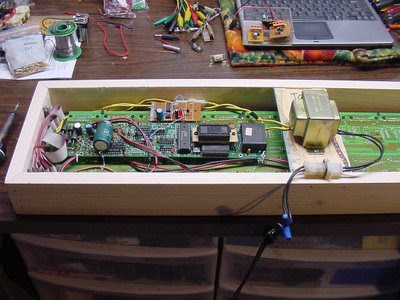 Home Made Dual Screen Monitor Base 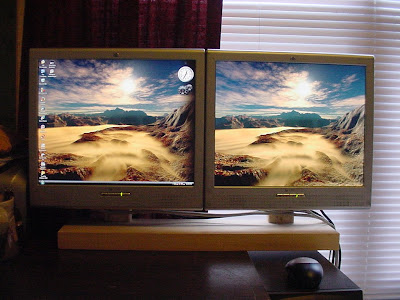 Recently I had an EBay deal that I just could not refuse. They were selling 17 inch LCD monitors for $44 each without the stand. With shipping they were about $60 each and they arrived not working. It turns out that the unnamed shipping company shook them so bad as to unsolder capacitors in the power supply. So after some minor repairs they worked. the next problem was what to use for a stand. They do not make dual stands that I know of and most stands cost more than I paid for the monitors.

Here is the solution. First a 1 by 6 connects the two monitors together. Drill 4 holes at each end of the 1 by 6 that line up with the mounting holes in the back of the monitors. Then I used some 2 by 3's about 1 foot long to a 2 by 6 base that is 2 foot long. The tops of the 2 by 3's were notched so that they are under as well as behind the 1 by 6 that connects the 2 monitors. I used a high quality 2 by 6 for the base since it can be seen. That one board cost me $8, the rest of the boards were all off the scrap pile.