I purchased two 5 meter (almost 200 inches) WS2812 addressable LED array strips.  Then I seperated them into ten strips of 15 LED each about 20 inches long.  Why 15 LED's? Because that is where they are soldered together at the factory.  Then they were stuck on "yard sign" material for a backing.  The result is a 20 inch by 20 inch 15 by 16 LED array.

This picture shows where they are soldered together at the factory.

This picture shows the 5 volt 12 amp power supply.  The array takes bout 3 amps to power it. 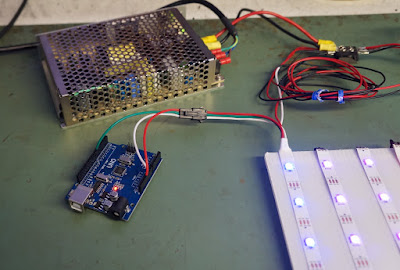 Here is the video demonstrating the array running the Adafruit demo.


This video has 4 LED strips reorganized as 600 LED's working.

Someone asked me why I did not include addressable LED arrays in mt book "Arduino LED Projects".  Well basically back them I did not know about addressable LED's.  SO recently a friend wanted some LED effects at his wedding reception so I started looking into addressable LED's.  The first thing I bought was a 8x8 LED array.  I connected it up and loaded Adafruit's NeoPixel software into the Arduino and got NOTHING!

Then someplace I read that the Data in and Data out labels are swapped.  So, to get it to work connect the D out pin to the Arduino D6 pin.  It came to LIFE!  Then after about a minute smoke rose out of the Arduino.  The voltage regulator had gone up in smoke.  Find an 5 volt 1-2 amp AC adapter and use that to power the LED array.

Here is a picture of it running the Adafruit demo. 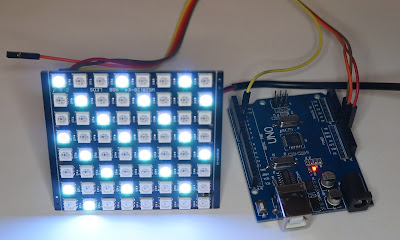 This is the back view showing how to connect it to the Arduino and to power. 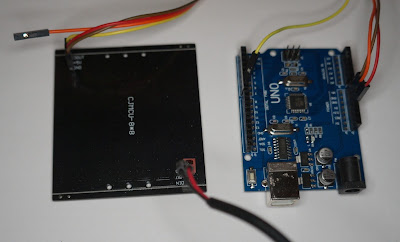