Many years ago, while visiting a church, I made the mistake of closing my hymnal, because I knew the words to the song by heart.  Far be it from me to show such disrespect to the writings that are second in line behind the Bible.  The preacher rightfully called me out and warned me that crazy Pentecostals (I was a Methodist) like me will end up in an insane asylum within 6 months.

So when I moved to Virginia Beach I did the right thing and went to a Pentecostal church. There the hymnals had been replaced with a slide projector, so I would not offend anyone by not using the hymnal.  The slide projector held 80 slides, at two slides per song, that’s 40 songs per carousel.  There were three carousels but we tried to keep the songs we used the most in one carousel.  Being a techie guy, I was quickly put in charge of running the projector.  There was an notebook with an index that kept track of what song was at what position but after a while you memorized the song numbers. Sometimes, almost magically, one of the slides would be upside down or turned sideways.  That had to be quickly corrected!


To add a song, you had to type the song perfectly on a typewriter.  Then take a picture of the song with a 35 mm camera, develop the picture and have the negative turned into a slide. So it took several weeks to add a new song.  Eventually that church had a split and I tried to stay neutral, until a close friend lovingly told me that if I did not take sides he would slit my tires.

I left that church and went to a church that was pastored by Jim Murphy. My brother encouraged the church change by having two beautiful young ladies pick me up for church.  At this church we used an overhead projector.  It used clear plastic sheets that you could write on, so adding a song took minutes instead of months! The songs were kept in a box in (hopefully) alphabetical order.  Now when a song came up upside down it was clearly the fault of the projectionist!

Years later, while on the staff at Elim Bible Institute, I pushed the use of computer projectors. I encouraged many churches to make the change.  With these projectors you can even add background images!  Songs were saved in PowerPoint back then.  Now PowerPoint would not remember that you want the song to appear on the projector, though matter what you did!  So every song had to be preloaded and then switched to use the projector. If you forgot to tell it to use the projector then you had to fix it quick!  I guess Microsoft wanted people to buy programs designed to display songs, so they never fixed PowerPoint.

But now for the bad news, some churches are no longer using projectors!  How dare they go against my advice!  One of the first churches to change was that of my own brother!  How dare he betray me?  His church switched to using two big screen TV’s.  The next church I noticed was when Pioneer Christian Fellowship in Arcade’s pastor Jeff made his church reopening announcement.  I totally paid no attention to what he said because in the background the projector was gone and there, in plain sight, were two big TV’s.  Now we all know that TV is of the devil, so what gives?  Then a couple weeks later I was at Springville Assembly of God, and low and behold, they had changed too!  I though an AOG church would be the last church to switch! 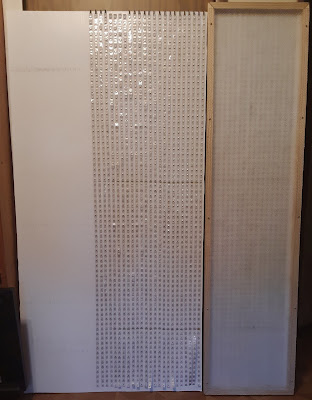 Since the LED strips are actually made up of sections that are 1/2 meter long they need to be soldered to get 4 feet.  That takes two 1/2 meter, 30 LED lengths and then 12 additional LED's. 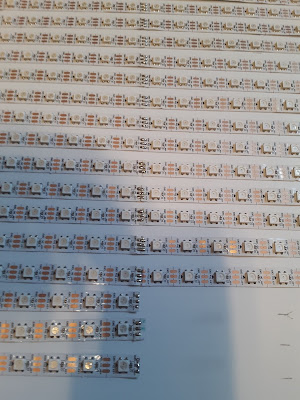 Here is a big picture of the sign being made. 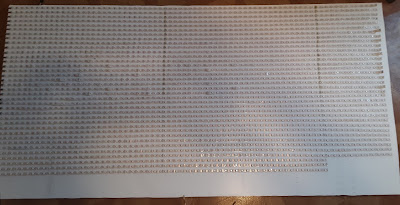 The LED panel has all of its LEDs in place now. 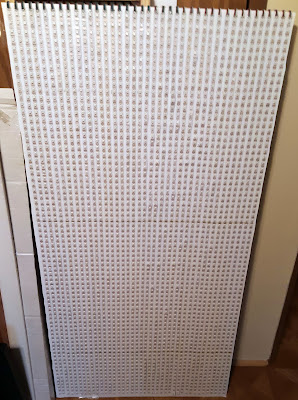 I need to make wire harnesses to connect to all of the connectors.  The harnesses are made in groups of 8 for the 8 data lines from the Arduino. 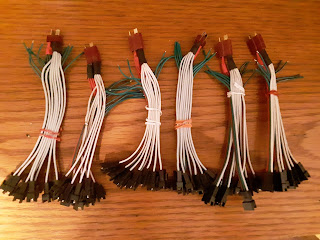 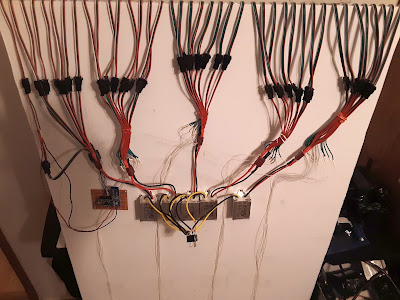 This is the new processor assembly.  It is simpler than using an entire Arduino Uno, it is a Nano instead. 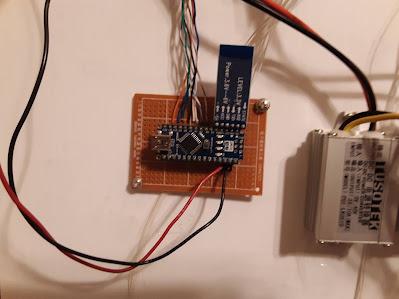 Here is the first picture of the big sign working.  The text is being cut off for some reason. 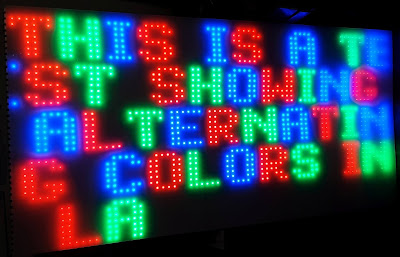