Chevy HHR Wiring issue - Car will not even try to start!

My car would not start this last Saturday.  The dash would light up but it would not even try to start. The next time I tried it the battery was completely dead.  So I bought a new battery and it still would not start.  Eventually I realized that the radio was dead and the interior lights were dead.  I chased the issue to the "BCM" located on the right side of the center console.  The red/black wire going to it was dead. So I jumped it to 12 votes.  Now the lights and radio worked but it would still to even try to start!

I checked the fuses at the main fuse box, fuse 4 and 6 that go to the BCM but they were fine.  So I completely removed the fuse box to inspect it and found nothing wrong. Then while searching the internet I discovered that the BCM gets its main power from the battery via a 50 amp fuse next to the battery.  After checking the fuse, I tried putting a test tone on that wire to follow it to the BCM but it was almost completely shorted out to ground.  I removed the 50 amp fuse and cut the wire at the BCM but it was still almost a short to ground.

The test tone on the wire disappeared behind the passenger seat.  So I removed the passenger seat, cut the carpet and exposed the wiring. The carpet was very wet and covered in red rust.  The bottom side of the wiring harness was rotted through, some wires were completely gone.  Some were melted together.  Others were burnt. 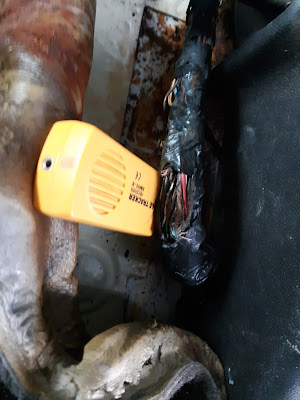 This picture shows the area where the seat was removed and the rust on the carpet. 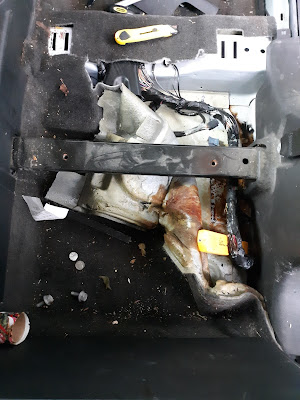 I do not know where all of the water is coming from, but the water rusted everything and rotted out the wiring harness.