I recently had to re-repair the Poloroid TDA-03211 3211 32 LCD TV. This time one of the tiny blue capacitors in the red circled area had shorted and turned black. 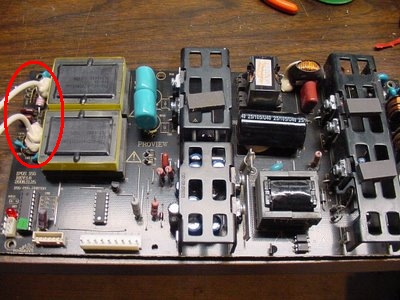 I could not read what was written on those caps so I removed them and tested them. The two good ones were about 1 pf, or at the range limit of my capacitor meter. They appeared to be 3 KV caps. So I replace the fried one with a 1 pf 3Kv capacitor and the TV still did not work.

The problem was that I had soldered one capacitor in wrong.  Two of them are part of the protection circuit that detects any problems and shuts down the High Voltage.  They have to be replaced properly or the set will shut off after about 5 seconds.

Here is a better picture of the power supply: 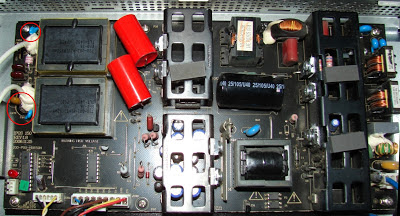 I circled the blue caps, the tan one is my replacement capacitor.  Notice the large red caps, they are 2.2 uF at 400 volt paper caps that replaced the old 4 uF electrolytic caps.