I recently purchased two defective Dream Cheeky USB Foam Missile Launchers.  I wanted to add one to my Devastator tank (See other blog posts).  So far I have rebuilt one of them.  The turret did not rotate and it did not fire correctly.  The other one only fires from one position and the turret does not move up and down.

Here is a picture of the finished project: 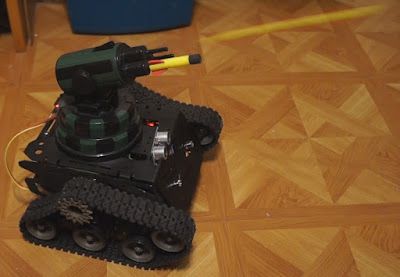 There are two USB missile launcher designs.  One has a rotating missile holder for four missiles.  The other design holds three missiles and fires them without rotating.

On the first USB launcher the rotation issue worked when I connected a battery to the motor so the issue was in the electronics.  The firing issue was related to some teeth missing form a gear.  I fixed that by re-positioning the gear.  Note that to dissemble the top assembly there are two screws on the left side, one is hidden behind some green tape and the other is only half hidden behind the tape. 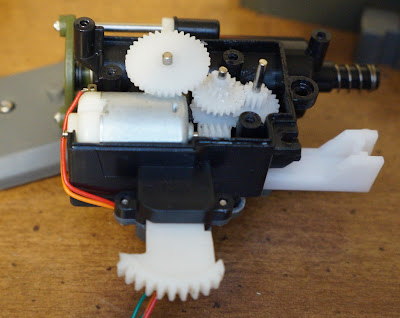 Here is a picture of all of the guts opened up except for the top. 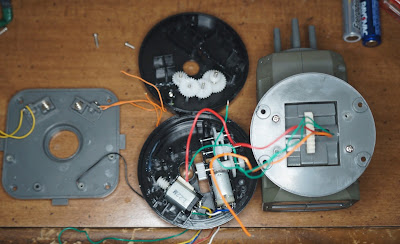 Here is the wiring color code.  Note that there are several wires having the same color as other wires.

Here is the control circuit of the 3 position launcher.  The up/down motor is connected in the bottom left area without any glue on it. 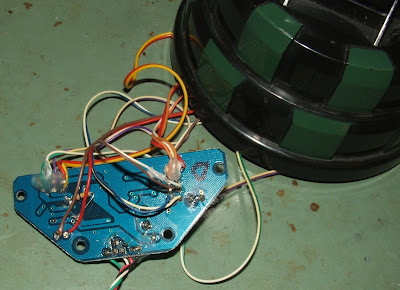 BTW the problem with the height motor not working is that the driver transistors only deliver about 3.5 volts.  Use a 9 volt battery to run it up and down a few times and then reconnect it to the USB interface and it will work normally.

Next I will connect a motor controller and an Arduino to obtain working serial control of the launcher.  I used a L298 motor control for the turret and a TIP120 for the fire function.  The USB power was not sufficient for the fire motor so I used a 9V battery.  That was because of a problem with a broken gear and has been fixed. 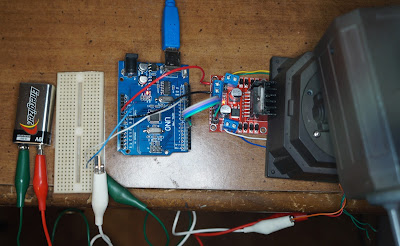 Here is the first test video.  I need to get the right kind of missiles!

It is now attached to the Devastator tank, here is that video.

Here is a video of the tank with the three missile launcher attached.