I was given a Dynex 37 inch LCD TV to repair or sell parts out of.  The first most obvious problem is the power supply needed two new 1000 uF 35 volt capacitors.  Those capacitors were bulging with some black ooz coming out of the top of one of them. 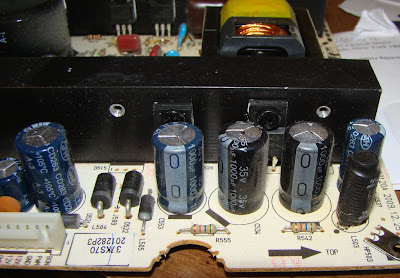 The second problem is that there are two CCFL tubes that are dim or out.  This causes the OZ964 based inverter to shut off after a couple of minutes.  The standard solution is a 5K resistor to power and a LED to ground.  Attach the center of the two to pin 4 or pin 10 depending on what web site you visit.  Using pin 5 as power and attaching the led to pin 4 resulted in a dim picture.  Using pin 10 was also dim.  I changed to a high efficiency green LED to get good brightness. That green LED is a 2.2 volt device when most LED's are 1.8 volt devices.  If you use a 2.4 volt device the screen gets too bright and starts flashing likely because of an over current condition. 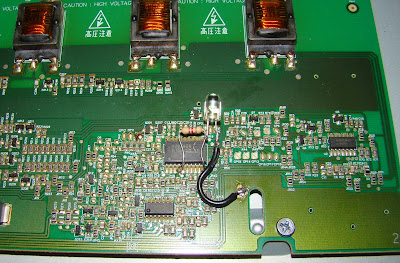 Here is a picture of the other side of the inverter board showing the model number. 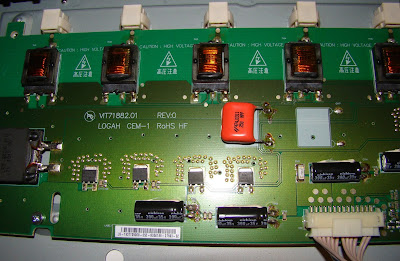 This mod did not last.  After a few weeks the screen brightness started flickering then went dim.  Next I tried the load resistor idea.  I tested the CCFL tubes with a small 2 tube driver.  It only lit the tubes dimly, but, with it I could clearly see tube 2 was not lighting at all.  However, when I had bypassed the safety shutdown, tube 4 or 5 was also not working.  That might indicate there is a bad transformer.

I attached a 470K resistor from CCFL output 2 to ground.  The TV blinked on and off.  I added two more resistors so there were three 470K resistors in series.  That worked for 10-20 minutes until smoke started rolling off the resistors.  Apparently you need about 160-220K rated for at least 5 watts to do this trick.

Next I tried linking two of the outputs together.  I used a 1K resistor from CCFL 2 to the other outputs one at a time.  I discovered that trick works for every other output.  Apparently there are two phases and crossing them causes the TV to shut down.  But, linking two outputs together through a 1K resistor, seems to work for now.  I will keep you updated on this option and how it lasts. 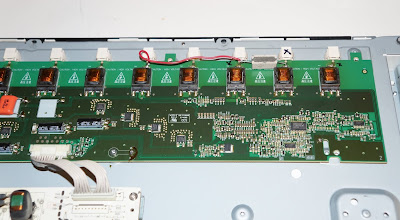 This modification has lasted for a few months now.