I am Making my Third Humanoid Robot

I have started on making my third humanoid robot.  This one is modeled after the EZ-Robot JD Humanoid.  The issue with the larger humanoids is that their center of gravity is way too high.  There is a two degree tolerance in each servo and that is amplified by the distance from the servo's.  So in a humanoid that is over 16" tall the two degrees can amount to falling over frontwards or falling over backwards.  That makes it really hard to write software for walking. 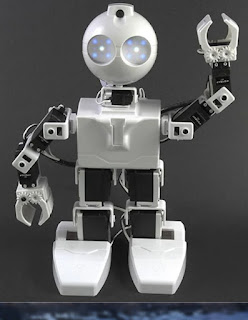 One solution is to make the robot shorter and to make the distance from each servo shorter.  In the following picture there is a servo for the EZ_Robot on the left, for the Hadron Robot in the middle, and for the mechanical robot sold on eBay on hte right.  The EZ-Robot assembly is so short that the ears need to be cut off the one end of the servo for it to work.  The Hadron robot on the other hand is not much smaller than the mechanical version, it also is not quite square.

As I tried more options the possibilities expanded to five different versions.  I think I will have to design my own!

The robot body would take 16 hours to print as designed.  I turned it over and that reduced the time to 10 hours.  However since there would be supports under the front, the front surface is not a smooth.
Then I ran into the issue with the shoulder servos needing their tabs cut off.  What is it with the designers and cutting the mounting tabs off the servos?? 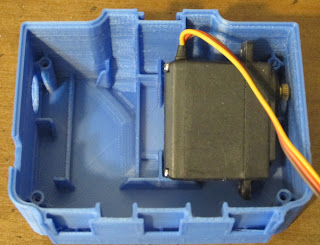 My solution was to cut some slots in the top for the servo mounting tabs.  I used a soldering iron to do that trick.  BTW when I added the legs the body broke in half!  These parts fit way too tight.  I file them off so they are smooth before even trying to fit them together. 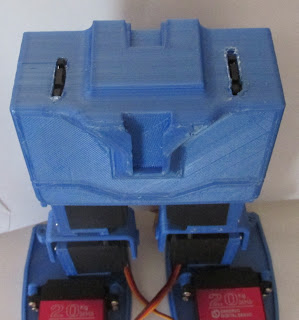 The robot is now about 1/2 way completed.  Here is what he looks like so far. 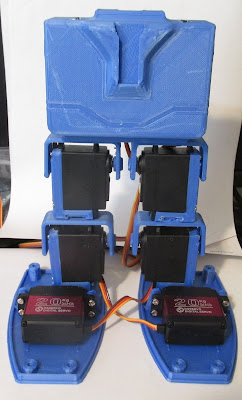 The next issue was that the shoulders (Servo horn extenders) keep breaking in half.  So I rotated them so they stand up before printing them and that seems to fix the issue.

The U brackets for the legs kept breaking.  So I developed my own design. 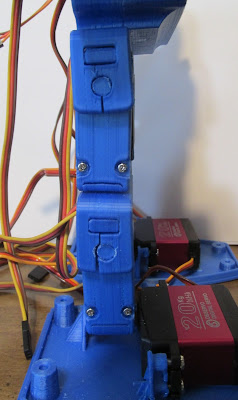 So far I have come up with six different servo U bracket design options.  The five on the left do not require you to cut off the servo mounting tabs and they do not break as easily as the ones normally used for this robot.  Somehow I lost the mounting holes in the fifth one but I added them back in later on.

So far he is coming together. The head has too big of an opening for the LCD screen.  I cut it for a 2.5" LCD but then the screen did not fit because the LCD circuit board was too big.  I may have to make a bezel for the LCD to cover the mistakes..... 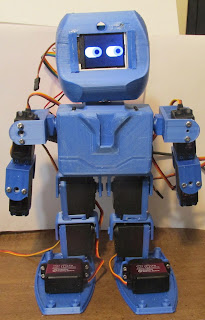 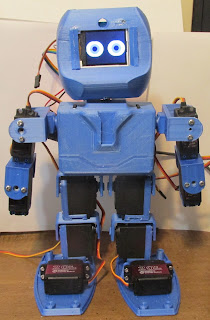 I almost gave up on his hands.  I have piles of servos but none are the size that properly fit his hands.  There is a size of servo that is in between the SG90/HS55 and the normal sized servo (They are marked "PKZ1060") but even they do not fit.  So I modified the hands to use the SG90 sized servos.  I had to drill out the servo end so the white servo arm would fit through it then I melted a hole for the screw that locks the arm to the printed arm. 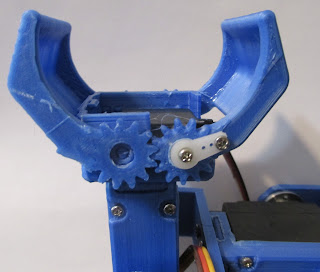 I had to remove the left side (It broke off anyway) and then trim a little for the round part of the servo to fit.  Then I used lots of glue to hold the servo in place.  I had trouble with mounting the hands to the arms so I added a screw, as can be seen below the servo in this picture. 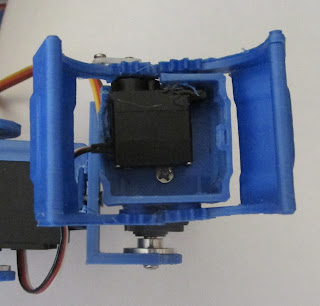 Here is what he looks like with his hands attached.  Now to add a servo controller. 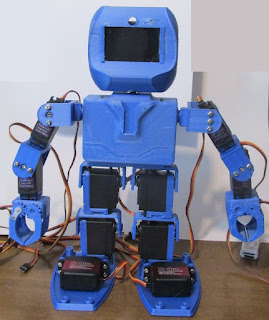 This next picture is a size comparison.  JD Humanoid is in the front left.  To the right is the Robosoul HS3 and behind them is the humanoid that is sold on eBay. 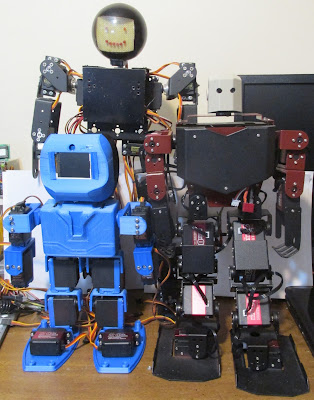