I have been testing various fast analog to digital converters with the Arduino.  There are two  objectives. I want to see if I can improve the old CA3306 version by getting rid of the glitches.  I want to add a FIFO that can push past 10MSPS as that was the fastest rate achieved previously.

The first picture is of a rebuilt version of the CA3306 circuit. 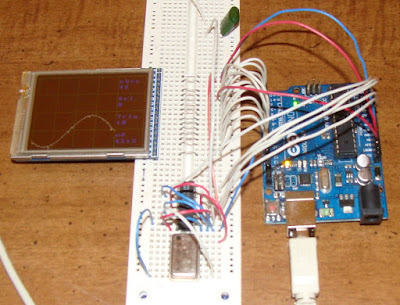 Next I tried a TLC5510.  The results were a bit noisy as seen in the next picture. 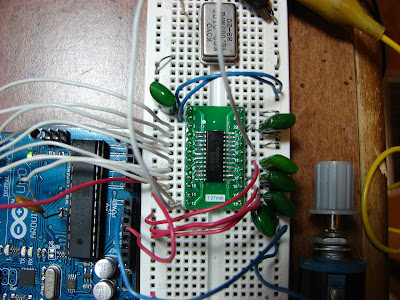 A picture of the TLC5510 screen.  The noise might not be the fault of the A to D converter.  The noise was cured by synchronizing the clocks. 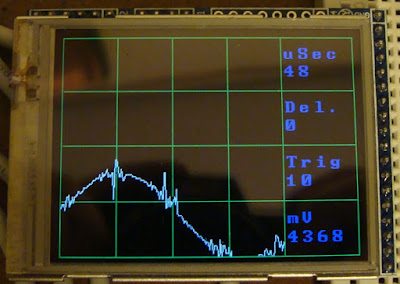 TDA8703 Analog to Digital converter being tested.  At first it did not work until I increased the power from 4.2 volts (from USB) to 5 volts via an AC adapter. 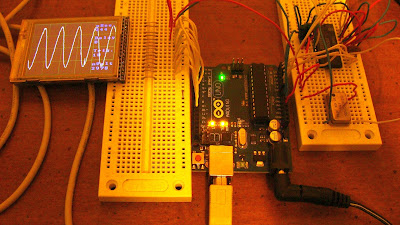 I found a way to synchronize the clocks and thus reduce the amount of glitches!  Here is the video.


Here is a Youtube video showing the TLC5510 running without the clock glitches.


Here is a video showing a completed Arduino Oscilloscope with working selection switches.

Email ThisBlogThis!Share to TwitterShare to FacebookShare to Pinterest
Labels: Arduino

Hi, I'd love to build this but I have no coding experience (or little) do you give out your code?

So, are the codes available for this project sir?
I would like to build this please Ben

My code is elsewhere on my blog and in my book "Arduino Oscilloscope Projects" available on Amazon.com

This is Arun from India.
I purchased your book yesterday. Very Interesting read.
I'm software engineer trying to learn hardware stuff. I have the following questions for you.

1. Can i use TLC5510/TDA8703 to read SPI data. SPI interface data transfer rate is at least 10mbps. My requirement is to check if data is transferred or not in the interface.

Arunachalam - You will need a FIFO. There is also a cheap little USB 8 channel logic analyzer that could do the job. It is less than $20 on eBay. It works up to 25MHz.

Any 5-10 MHz clock will work. For the Arduino I use 8 MHz and synchronize the clocks.