I am just finishing up building the InMoov Robot head.  First you must know that there are about four revisions for every part.  For instance I did the earlier version of the eyes first.  They had very limited range of motion.  So I made a newer version and they had much better movement.
I also tried painting the parts for the first time.  I used paint-able caulk first, then several layers of a sand-able undercoat followed by at least 2 layers of paint.  This next picture shows the results. 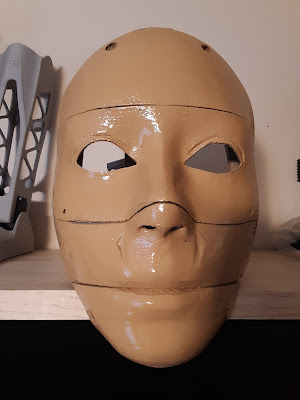 This is what it looked like before painting, the holes have been filled with caulk. I do not know why there are so many holes in the design! 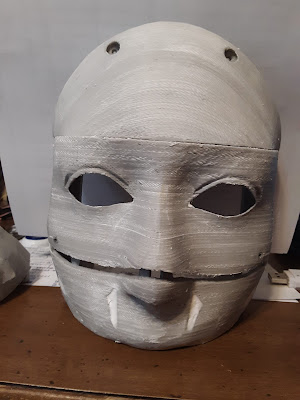 This is what the eye assembly looked like.  I modified it slightly to fit an older Logitech webcam guts.  However the camera was upside down when it was tested. 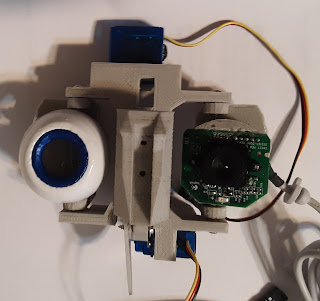 I modified the gear for the mouth and the ears as well.  I wanted ears that were fairly flat, but that resulted in the magnet hitting the jaw mechanism.  I will have to find some lower profile speakers. 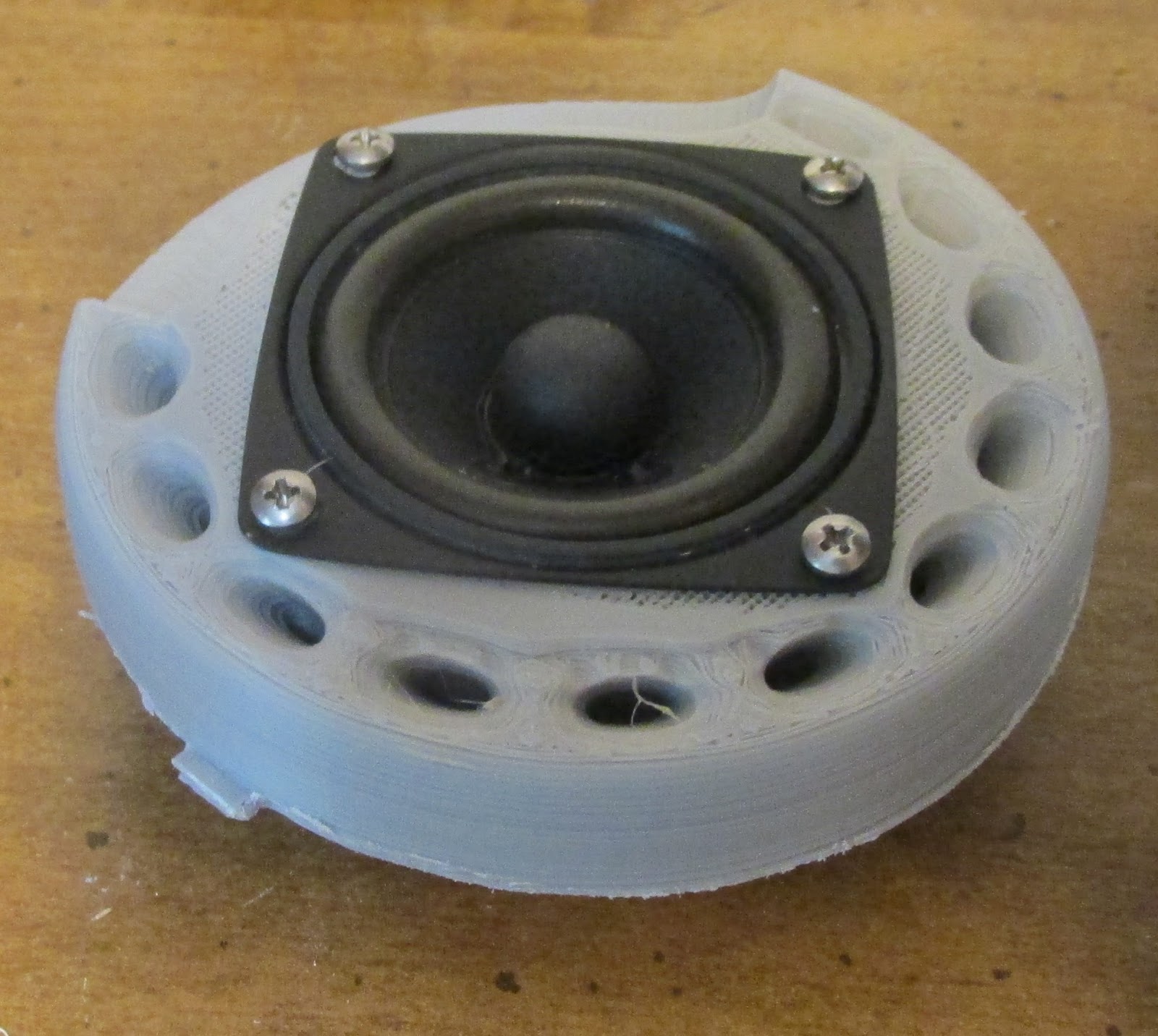 I also located and added a base.  The real inMoov robot has more than just a head, but I wanted to stop there for now.  I had to cut the throat piston off at about one inch shorter to fit properly with the stand. 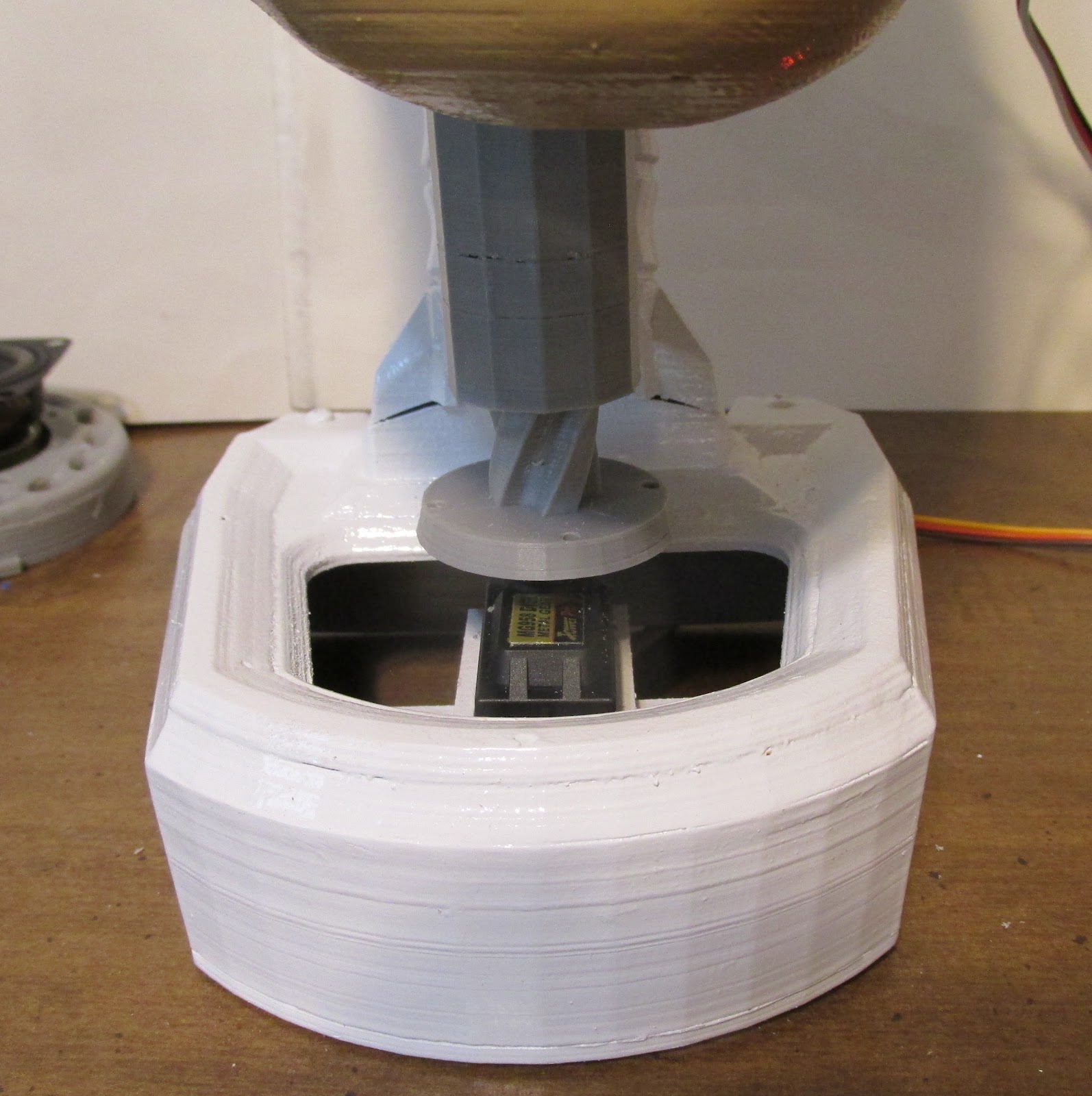 Here is what the completed robot head looked like. 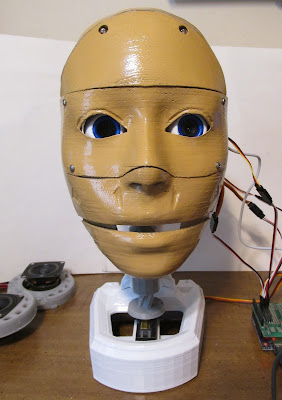 I also recorded a video of me testing the servos to see if everything worked.  I used some MG958 servos that are twice as powerful as standard servos but I was not sure if they would be powerful enough.
Posted by Bob Davis at 9:14 PM

Looks like you are getting some under-extrusion (the holes) and even over-extrusion (the over fills). You may want to check your extruder and see if you are getting any slipping (you may hear clicking) or see filament tearing) if there is a lot of retraction used. I have had this over the years myself caused by too high of a retraction setting, printing too fast, not having the hot-end hot enough, worn out hot end flow track, under powered extruder stepper or bad hob-gear. If you are using Teflon tube to feed the filament in with, it could jam in there as well.

Hey Bob, I stumbled across one of your books about Addressable LED lights. There, you are giving great instructions on how to connect 8 strips of addressable LEDs to your arduino board. My soldering skills are non-existing :), is there any other way with connectors to complete this setup without any soldering, please? I'm struggling with the part about connecting to the power supply ( i bought a 5V 15amps)? Im not following your projects here and this one is really interesting, after i finish up the LED, i will attempt something similar.

Scott,
It was under extrusion. There was a lump between the teflon tube and the heat break. It eventually became so bad that I had to disasemble the printhead to see what was happening. The lump had grown to nearly 1/2 an inch in size and was apparently pushing the teflon tube back out of the printhead.

Pete,
I do not know how to connect the power supply to the LED strips without soldering. You can order 8 LED strips but you will need to connect all of their positives and negatives together and to the power supply. Then the 8 signals need to be connected to the arduino. Maybe you could use crimp connectors and binding posts?